Deaths as carriages fall on US motorway 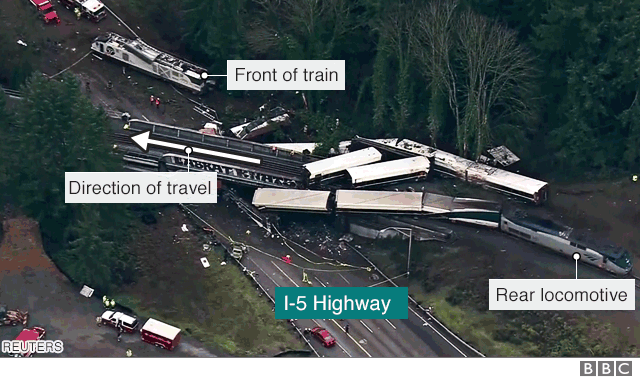 At least three people have been confirmed killed after a US passenger train derailed onto a motorway in Washington state during rush hour on Monday morning.

Officials say 72 people were taken to hospitals after most of the Amtrak train's carriages left the track.

A number of those injured are reported to be in a critical condition.

Authorities said all carriages had now been searched, but would not rule out a rise in the number of dead.

Seven vehicles, two of them lorries, were hit on the I-5 highway below. Several people were injured in their vehicles but none died.

It was Amtrak's first passenger service to run on a new, shorter route.

Train 501 had left Seattle, heading south for Portland, at 06:00 local time (14:00 GMT). The derailment happened on a section of track, south of Tacoma, previously only used for freight trains.

One passenger carriage could be seen dangling from the bridge, while others were strewn across the road and the wooded area next to the track.

A photograph released by Washington State Patrol showed one carriage upside down on the road, with wreckage all around it.

There were 86 people on board, including 77 passengers and seven Amtrak crew members, as well as a train technician.

Police say 19 people were taken from the scene uninjured. Of the 72 transferred to hospitals for evaluation, 10 were considered to have serious injuries.

A state transport spokesperson was quoted in the Seattle Times newspaper as saying the curve where the train derailed had a 30mph (48km/h) speed limit.

Barbara LaBoe said the limit on most of the track was 79mph (128km/h) but drivers were supposed to slow dramatically at the spot where the train derailed.

She said warning signs were in place two miles before the lowered limit. The Associated Press reported that a website mapping train speeds suggested the train may have been travelling at 81mph before the derailment.

The cause of Monday's crash has not been confirmed and investigators have not yet commented on whether speed was a factor.

"Emergency! We are on the ground!" a man, possibly the conductor, radios in.

In a second radio call, another crew member reports that only the rear unit remains on the rails.

"All other cars appear to be on the ground in quite a mess," he says.

The train's engineer has a head injury, he tells dispatchers.

President Donald Trump's first reaction to the derailment was to tweet that it showed the need for his forthcoming infrastructure plan.

However, US media outlets pointed out his submitted federal transportation budget actually proposed cuts to funding to national rail systems.

The train accident that just occurred in DuPont, WA shows more than ever why our soon to be submitted infrastructure plan must be approved quickly. Seven trillion dollars spent in the Middle East while our roads, bridges, tunnels, railways (and more) crumble! Not for long!

He later added that his thoughts and prayers were with those involved.

The section of track where the crash happened has been recently rebuilt and upgraded using federal funds.

Washington's governor has declared a state of emergency in two counties. 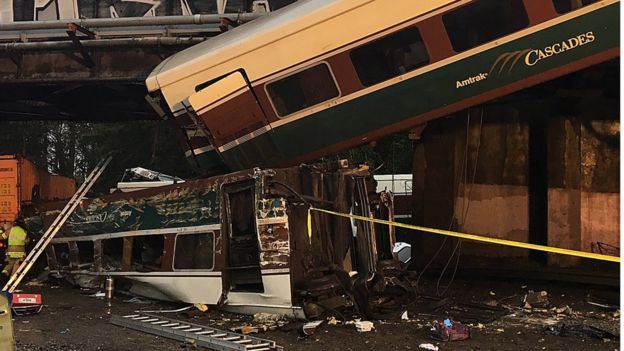 Passenger Chris Karnes, on board the train, said his carriage had careered down an embankment then come to a stop: "We could hear and feel the cars crumpling and breaking apart, and water came out from the ceiling."

"In order to get out… we had to kick out the emergency window," he added.

Governor Jay Inslee said he was praying for the many injured.

Officials set up a family reunification centre at DuPont city hall and asked people not to come to the scene of the crash.

A local news reporter who was on the train, but got off at a stop just before the crash, said many of those on board were railway enthusiasts, keen to experience the first high-speed train on the new route.

Every passenger was given a commemorative lanyard and badge to mark their journey, he said.

The National Transportation Safety Board is investigating the cause of the accident.