Deforestation – Who bears the brunt 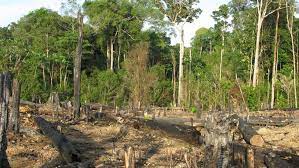 Local community participation in forestry management and the availability of forests user rights in Ghana, supported by legal and political frameworks has shown the efforts of the country in bringing on board all and sundry to ensure governance in the sector is apt.

In spite of the arrangements, Ghana’s forest according to reports (The FLEGT Magazine) could disappear in 25 years if forests resources continue to dwindle.

The implication of the loss of forest is expected to affect women and men differently.

Goal 15, of the Sustainable Development Goal (SDGs) on life and land indicate that, plant life provides 80 per cent of the human diet and also affirms that forest cover 30 per cent of the earth’s surface, and provides vital habitats for millions of species and important sources for clean air and water.

Are we enjoying the full benefits to be provided by the forests?

Benefits that forest fringe communities derive from natural resources and the ecosystem cannot be measured and most often underestimated.

However, depletion of forest, decrease in forest cover and climate change as a result of human activities, pose a threat to the benefits. This should be a great worry to all, as the daily sustenance of human-kind especially women is at stake.

The gender dynamics within our socio-cultural setting have impact on livelihoods activities including; forest related ones.

First of all, access to forest resources varies between men and women. Again, the types of products collected from the forests are different. For instance; while women look for non-timber forest products such as fuel-wood, wild fruits, herbs and nuts their male counterparts often look for timber.

Finally, women mostly used resources from the forest to augment family income and support household needs, while men perceive them as personal resources or personal income.

Decline in forest cover as a result of deforestation, is having significant effects on women in a number of ways.

This include; availability of the resource, distances to be covered and the time spent to collect non-timber forest products such as fuel wood, herbs and fruits.

Ayisatu Agumah, a farmer from Zawse in Bawku in the Upper East Region, uses the Zawse Plantation regularly to scout for dead wood for her kitchen.

In an interview with the Ghana News Agency, she revealed that she travelled a long distance to collect the wood as compared to about 20 years ago when she was young and natural woodlots were not far from her community.

“We now walk long distances before getting some wood home. I came with two other sisters early this dawn and we are returning after 1100 hours”. She said.

According to Ayisatu, searching for fuel wood far or near is a decision women make and do not need to seek any permission from family heads, “Meal preparation is women’s priority and therefore failing to find wood means that I have an alternative method of providing food for the home which I do not have”.

“They cannot get money to go to the market to buy fuel wood so they have to always come here with peers to get some wood home for the next day’s. We used to also pick some vegetables for cooking, but due to frequent bush burning and depleted soil, there are no more such wild vegetables”, she added.

The lack of access to and control of economic assets (such as land and loans), social capital (such as education, health and legal rights) and the ability to participate in decision-making among others further deepen the challenges women face.

The Ghana Growth and Poverty Reduction Strategy (GPRS) 2006-2009 report indicates that low productivity and poorly functioning markets for agricultural outputs among others are the main causes of rural poverty in the three northern regions.

Meanwhile the poor vegetation, impact of climate change and women’s inability to access and control economic assets has dire consequence on livelihood of families in the rural areas.

Mr Ayambilla Osman, a farmer in Binduri, Upper East Region, in an interview reiterated the benefits of forests and revealed that women’s interest in Non-Timber Forest Products such as sheanuts, baobab and fruits (such as the borassus) were important and could serve as hunger stopgap as well as a good source of income.

According to him “hunting is a preserve for men, but owing to depletion of the forests, hunters cannot find bush meat”.

He also indicated that the environmental concerns had impact on the growing population and future generation, bearing in mind the usefulness of forest resources as providing a vital support system for livelihoods.

The country needs to strengthen its efforts at tackling the drivers of deforestation and degradation by empowering women to participate fully in the protection and management of forest resources including; community forests and forest reserves.

The 1992 constitution makes it explicit that men and women together are to safeguard the environment.

To this end, men and women need to play complimentary roles in managing forest resources to ensure sustainability.

The constitution also prohibits discrimination on the basis of gender and therefore, continuous separation of roles of men and women in forest management further create a structure of gender division and at the same time, makes gender invisible in the forestry sector.

Bearing in mind the usefulness of forest resources as providing a vital support system for livelihoods, the country needs to strengthen its efforts in tackling the drivers of deforestation and degradation by empowering women to participate fully in the management of community forests and forest reserves.

DISCLAIMER: The Views, Comments, Opinions, Contributions and Statements made by Readers and Contributors on this platform do not necessarily represent the views or policy of Multimedia Group Limited.
Tags:
Accra
Deforestation
Forestry