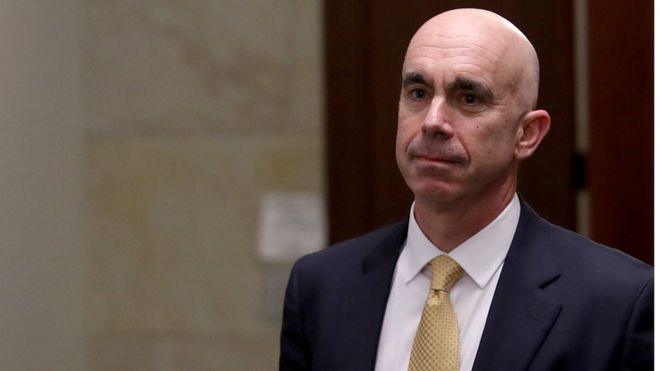 Steve Linick, who was appointed to detect mismanagement at the state department, was fired on Friday

US Democrats have launched an investigation into President Donald Trump’s firing of the state department’s internal watchdog.

But he was sacked late on Friday after Mr Trump said he no longer commanded his full confidence.

The move prompted angry criticism from senior Democrats in Congress.

They accused Mr Trump of retaliating against public servants who want to hold his administration to account. Mr Linick was the third official responsible for monitoring government misconduct to be dismissed in recent weeks.

The former prosecutor was appointed by Mr Trump’s predecessor, Barack Obama, to oversee spending and detect mismanagement at the state department.

On Saturday, top Democrats on the House and Senate Foreign Relations Committees questioned the timing of Mr Linick’s removal and announced an immediate investigation.

“We unalterably oppose the politically-motivated firing of inspectors general and the president’s gutting of these critical positions,” Congressman Eliot Engel and Senator Bob Menendez said in a statement.

They said Mr Linick had “opened an investigation into wrongdoing by Secretary Pompeo himself”, adding that his firing was “transparently designed to protect Secretary Pompeo from personal accountability”.

Mr Engel and Mr Menendez have requested that the White House and State Department hand over all records related to his dismissal by next Friday.

Meanwhile, on Saturday, the White House said the decision to oust Mr Linick was prompted by Mr Pompeo himself. “Secretary Pompeo recommended the move, and President Trump agreed,” an official said.

Mr Trump sent a letter to House Speaker Nancy Pelosi in which he declared his intention to fire Mr Linick.

Under federal law, the Trump administration must give Congress 30 days’ notice of its plans to fire an inspector general. It is expected that Mr Linick will leave his post after this time, with some reports suggesting a political ally of Mr Trump is being lined up to replace him.

“It is vital that I have the fullest confidence in the appointees serving as inspectors general. That is no longer the case with regard to this inspector general,” Mr Trump said in the letter.

Not long after Mr Linick’s dismissal was announced, Mr Engel, the chairman of the House Foreign Affairs Committee, said Mr Linick had opened an investigation into Mr Pompeo.

“Mr Linick’s firing amid such a probe strongly suggests that this is an unlawful act of retaliation,” he said in a statement.

House Speaker Nancy Pelosi said Mr Linick was “punished for honourably performing his duty to protect the constitution and our national security”.

It was the latest in a series of dismissals of independent government watchdogs.

The late-night, weekend firing of State Department IG Steve Linick is an acceleration of the President’s dangerous pattern of retaliation against the patriotic public servants charged with conducting oversight on behalf of the American people. https://t.co/VavmuJpX25

DISCLAIMER: The Views, Comments, Opinions, Contributions and Statements made by Readers and Contributors on this platform do not necessarily represent the views or policy of Multimedia Group Limited.
Tags:
Inspector General
Trump
US Democrats