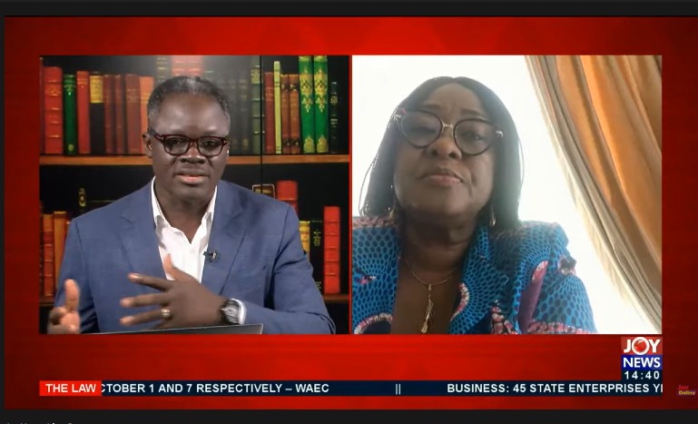 According to her, it is a crime punishable by law to remove, destroy, or otherwise unlawfully interfere with the property of the deceased person and deprive the entitled person of the use of the property.

Speaking on JoyNews‘ The Law, Mrs Minkah-Premo said, “as a practitioner, 30 something years afterwards, we still have people coming to our office, telling us that as soon as the husband dies they [deceased’s family] come locking up the door, taking the private car, to the family house.”

She told Samson Lardy Anyenini on Sunday that “people are still doing these things. So if you deprive any beneficiary of any part or interfere then you are violating the law.”

The Chairperson of the Executive Council of Leadership and Advocacy for Women in Africa (LAWA Ghana) stated that if a person commits such an offence, they are liable on summary conviction to a fine of not less than 700 penalty units and not more than 1000 penalties units as per the 2018 Intestate Succession Act.

They could also be liable to a term of imprisonment of not less than two years or more than four years or both (fine and imprisonment).

This means a person will be fined about GHS8,400 minimum and GHS12,000 or be jailed for two years minimum or four years maximum or both, Mrs Minkah-Premo explained.

In addition, she said that the court can also call for a reinstatement of the person who was ejected or reimbursement of the property.

Also, before the distribution of the estate of an interstate, if a person locks up and/or takes possession of the household property within the matrimonial home after one spouse passes away, they are also committing a crime, Mrs Minkah-Premo said.

However, she stated that for both crimes, many experts have argued that the punishment needs to be a lot stronger or more than what the Interstate law currently states.

Mrs Minkah-Premo explained that this is because the practice of taking advantage of surviving spouses is rampant in society.

“Maybe if it is further enhanced, hopefully, in the 2021 version of the Intestate Succession Bill, I think that it will be good. It is really very common. It is a time when a person is most vulnerable, you’ve lost the spouse, you are vulnerable and the family comes at you.”