Diego Costa scores and is sent off in first Atletico start 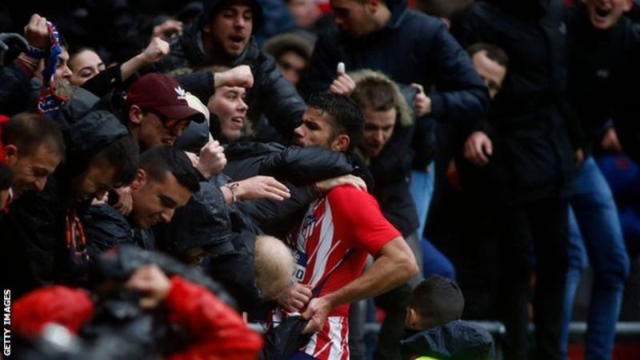 Former Chelsea striker Diego Costa scored a goal before being sent off seconds later on his first start for Atletico Madrid since returning to the Spanish club.

Costa was booked in the 62nd minute of Saturday's La Liga game with Getafe before scoring six minutes later.

He then jumped into the crowd to celebrate and was subsequently shown a second yellow card and dismissed.

Atletico won the game 2-0 with Angel Correa scoring the opener.

It has been an eventful return to Atletico for Costa. The 29-year-old started his career at the club before leaving to join Chelsea in 2014.

He came off the bench to score in his first game since returning – a 4-0 Copa del Rey win against Lleida Esportiu on Wednesday – before picking up an injury moments later.