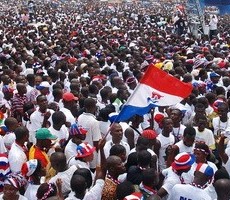 Aspirants who were disqualified from vying for positions in the New Patriotic Party in the upcoming congress, are ignorant about the party, the vetting committee has stated.

According to statement issued Saturday by the party's National Election Vetting Committee, the "persons were not successful due to their inability to exhibit enough knowledge of the party which high office they are seeking to occupy".

"They may appeal to the National Election Appeals Committee latest by 4pm on Monday 17th February 2014 if they wish to do so.

Meanwhile, one of the disqualified aspirants, Fred Amankwa Sarfo has indicated his resolve to challenge the decision the bar him from running for the position simply because "I don't know the National Council of Elders" of the NPP.

Mr. Amankwa Sarfo believes he has what it takes to occupy the vice-chairman slot and help bring back the party to power in the next elections.

"What we are going to do in 2016 is critical; we need somebody with the core competencies to help us win elections which I think I have…I will not let things go," he vowed.