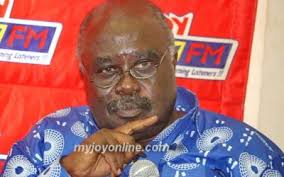 In an interview with Citi FM on Tuesday, November 1, he insisted that NPA must control the Oil Marketing Companies (OMCs) to follow the laws on deregulation.

“There is a jungle market going on in fuel pricing. Deregulation works because we have set up windows for which price changes will be announced. There are two windows for every month. The NPA as the regulator is supposed to ensure that it announces what is known as maximum retail prices, so no consumer gets cheated by the Oil Marketing Companies.”

“But NPA has reneged on its duty and given it to COPEC which ironically is supposed to be representing the interest of the consumer… COPEC is now the chief cheerleader for marketing companies that keep announcing prices willy-willy. That is not the way deregulation was set up to go, it just keeps piling the pressure on [consumers],” he said.

He thus called on the President to dissolve the institution due to its failings.

According to him, the NPA has let the consumers down by allowing OMCs to increase their prices without regulation.

“NPA is the regulator, why do you call them regulators if you can’t do anything? Then dissolve them.

Why do we call them regulators, they are to make sure that the interest of the consumer and the business are both protected, you can’t have it one way.”

Fuel prices shot up again on Tuesday, November 1, with diesel hitting GH¢23.49 per litre, while petrol jumped to GH¢17.99 per litre with Kerosene also selling at GH¢14.70.

DISCLAIMER: The Views, Comments, Opinions, Contributions and Statements made by Readers and Contributors on this platform do not necessarily represent the views or policy of Multimedia Group Limited.
Tags:
Akufo-Addo
Dr Charles Wereko-Brobby
Fuel Prices
Government
NPA