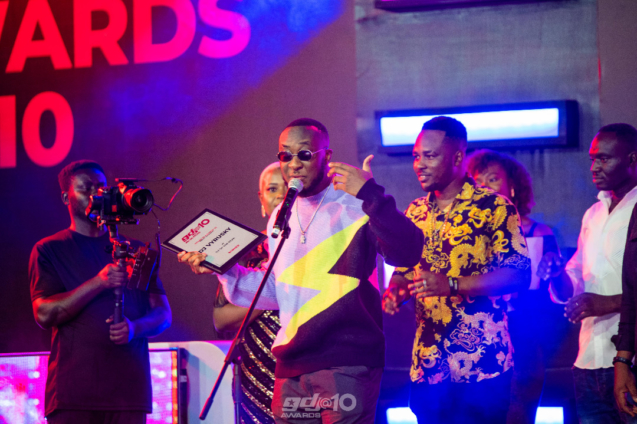 DJ Vyrusky emerged as the ‘DJ of the Year’ at the 2022 Ghana DJ Awards, after leading this year’s nominations with seven impressive nods.

He won two awards, namely the ‘Best Southern Zone DJ’ and the biggest honour of the night, ‘DJ of the Year’.

The 10th edition of the annual show took place on Saturday, November 5, at the Silver Star Tower in Accra. The event was aired live on the ultimate entertainment and educational lifestyle channel, Joy Prime TV.

Speaking to Joy Entertainment on the sidelines of the show, DJ Vyrusky commended organisers and producers of the awards ceremony for the initiative, saying it has helped in the elevation of some unknown and upcoming DJs in the country.

“We should acknowledge Merqury Quaye a lot. I mean, every day things come up. I always win, but sometimes that’s not even the category I want to win.

“There are some categories I feel I have to win, but I never win. I feel I should win event DJ every year because I rock every event and I play almost every event in Ghana…”

“This is something that has helped us get recognised more. If not for Ghana DJ Awards, we wouldn’t have known some DJs in there,” he said.

He urged DJs who could not win any award to avoid saying foul things about the event, adding that the award is given based on hard work and is helping the industry.

The awards scheme has won the hearts of stakeholders in the showbiz industry and music fans alike in Ghana and beyond since its inception.

DISCLAIMER: The Views, Comments, Opinions, Contributions and Statements made by Readers and Contributors on this platform do not necessarily represent the views or policy of Multimedia Group Limited.
Tags:
DJ Vyrusky
Ghana DJ Awards
Ghana DJ Awards 2022
Merqury Republic