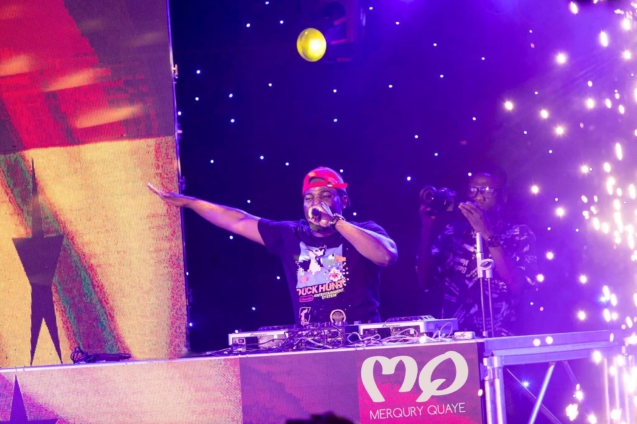 According to the ‘Father Of all DJs In Ghana’, DJs know what resonates with music consumers and understand the dynamics better, practically, than any other professional in the music space, including singers, and therefore harbour great production potential to influence our music to reach greater height.

“The DJ is at the forefront and knows what drum pattern entices party goers to the dancefloor. You can record a 4-bar intro, but the DJ listens and immediately knows it would have been better with four more bars. That is where you see the DJ loop an intro of the song to create that extension during a live set to create a perfect effect. These things the DJ does, make listeners fall in love with some songs. It is scientific”, he explained.

According to Merqury, DJing has evolved over the years. “DJing has moved from music playback to creating music. DJs are now in the realm of music production and organizing huge festivals and concerts. It will interest you to know that the top rated and high earning DJs in current times are those who produce music and headline concerts. Scottish DJ and Musician, Calvin Harris earns as much as 50M$ annually. At a net worth of 300M$, he makes a huge part of his money from music royalties. Other high earning DJs like Tiesto, Marshmello, and David Guetta all make their monies largely from music productions and concerts. Tiesto with a net worth of 170M$ will be embarking on his personal tour in Australia from March 2022”, he enlightened in an interview with Frederick Nuetei.

Every popular song on the radio had a music producer that cared about that song and was able to help shape the final product. DJs, over the years, learn what other people like; their feelings, what makes them smile, laugh, and dance; and then they use this information to inform their decisions on what music they should play. “Does this skill not put a DJ in a position to create great music?”, he quizzed.

“Ghana DJs have a bigger role to play in taking our music global. I say this because certain DJs have played for a wide spectrum of audience including expats and nationals of countries ranging from America to Zambia and have mastered what elements of music drive them. Radio DJs get listeners requesting songs and, over a period of time, get to appreciate the trend our audience want”, he stated.

Ghana’s Deputy Minister for Tourism, Arts and Culture, Honorable Mark Okraku-Mantey, for example, is a former DJ who doubled as a music producer. He made mega-hits including ‘Sika Baa’ by Lord Kenya, and ‘Party ‘N Bullsh*t’ by Sarkodie.