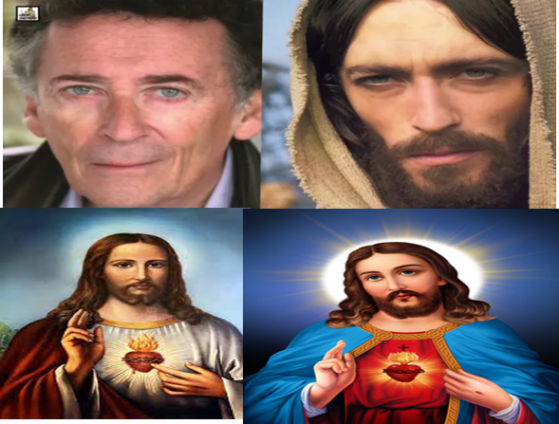 Worldwide and over many years to date, several images or pictures have been identified and duly used as the sacred image of Jesus Christ, the son of the Living God. Surprisingly, these “Jesus pictures” have been used by individual Christians as well as Churches and other Christian groupings.

Even in schools and in textbooks, learners have been convinced, or should I say they have been deceived to believe that a certain image was that of Jesus Christ.

The acceptance of these images of Jesus Christ knows no racial bounds for both whites and blacks believe and venerate those pictures and they are used mostly to decorate Christian altars and places of worship. In fact, some Christians even bow before these purported images of Jesus and pray, seeking for divine interventions for their woes.

It is thus ironical that some black Africans who revere the white man’s image claiming that it is the image of Jesus, turn round to say that the human Jesus was an African or whites are claiming ownership over the human Jesus. Other Africans also claim that Jesus was an African because the Holy Family (Jesus and his parents, Mary and Joseph) once lived in Egypt which is on the continent of Africa. Mathew 2: 13-14 reads, “An angel of the Lord appeared to Joseph in a dream. “Get up,” he said, “take the child and his mother and escape to Egypt. Stay there until I tell you, for Herod is going to search for the child to kill him.So he got up, took the child and his mother during the night and left for Egypt”.  In fact, where the Holy Family lived in Egypt can currently be located in the City of Cairo.

Perhaps most Christians have been oblivious of the fact that the Bible which is the blueprint of Christian life cautions believers against image or idol worship and such verses abound both in the New and Old Testaments of the Bible.

In the Old Testament for example, Leviticus 26:1 states, “Do not make idols or set up an image or a sacred stone for yourselves, and do not place a carved stone in your land to bow down before it. I am the Lord your God.” It is equally recorded in the New Testament that Jesus Himself said that God is spirit hence His worshipers must worship Him in spirit and that God seeks such worshipers who worship in spirit (John 4: 23-24).

Destruction of the Images of Jesus Christ

In the 16th-century Protestant Reformation, the followers of John Calvin in particular saw images of Christ as idolatrous and therefore, enforced their removal. Due to their understanding of the second of the Ten Commandments, most Evangelical Protestants still avoid displaying representations of Jesus Christ in their places of worship. John Calvin was a French theologian, pastor and reformer in Geneva during the Protestant Reformation. He was a principal figure in the development of the system of Christian theology, later called Calvinism, including its doctrines of predestination and absolute sovereignty of God.

Most of the images purportedly revered and worshipped by some Christians as image of Jesus Christ are rather images of an English actor by name Robert Powell who played Jesus in the 1977 movie dubbed “Jesus of Nazareth.”  Subsequently, Powell’s image went viral globally and has been worshipped by even the church as the image of Jesus Christ. In February 2017, Powell himself became worried about the unfortunate development and accordingly cautioned people not to revere his image for he is not the real Jesus Christ. He said, “I keep saying it and I repeat it to the world since 1977, I am not Jesus Christ. I am simply an actor and British comedian. I am tired of seeing my photos show in places of worship and houses; I just made a movie to earn my life so people should stop worshipping me instead of God.”

So, what started in 1977 (some 45 years ago) as a movie has led to the widespread worship of the lead actor’s image which has been termed as the image of Jesus Christ. It went on until the actor became alarmed and warned people to stop worshiping his images. In the New Testament, Romans 1:22-23 frowns on the worship of images of mortal beings like Robert Powell. The Bible refers to image worshippers as fools. Romans 1:22-23 stipulates, “Although they claimed to be wise, they became foolsand exchanged the glory of the immortal God for images made to look like a mortal human being and birds and animals and reptiles.”

In Revelation 19:10, even the angel of God cautioned Apostle John not to worship him (the angel). John said, “I fell at his (the angel’s) feet to worship him, but he said, “No, don’t worship me. I am a servant of God, just like you and your brothers and sisters who testify about their faith in Jesus. Worship only God. For the testimony of Jesus is the spirit of prophecy.”

I dare submit without equivocation that veneration or worship of any image purported to be that of Jesus Christ is idolatry and for that matter unchristian and unbiblical. There are no known images of Jesus Christ from his lifetime. Whereas in the Old Testament Kings Saul (1 Samuel 9:2) and David are explicitly described as tall and handsome (1 Samuel 16: 12), there is little indication of Jesus’ physical appearance in the Old or New Testaments.

One may however decipher Jesus’ physical looks to be that of a Jew or Hebrew because His genealogical accounts in the Gospels of Mathew and Luke point to the fact that the human Jesus was a Jew and a Hebrew, born to the Virgin Mary of Galilee, a Jewish city. Jesus was thus an Israelite.

Based on the fact that Jesus came from Judah’s lineage within the Jacob (Israel) family, the Bible in its New Testament refers to Jesus as the Lion of the Tribe of Judah (Revelation 5: 5). The Lion of the Tribe of Judah title for Jesus emanates from the dying Jacob’s prophetic words to his son Judah. Jacob said to Judah (Genesis 49: 8-10), Judah, your brothers will praise you; your hand will be on the neck of your enemies; your father’s sons will bow down to you. You are a lion’s cub, Judah; you return from the prey, my son. Like a lion he crouches and lies down, like a lioness—who dares to rouse him? The scepter will not depart from Judah, nor the ruler’s staff from between his feet, until he to whom it belongsshall come and the obedience of the nations shall be his.

As such, the human Jesus might have looked like the Jews today. If this logic-backed by Biblical verses- is anything to go by, then the image of the British actor and comedian, Robert Powell should not have been designated as the image of Jesus Christ let alone be worshipped or bowed to in churches and at homes.

To this end and on the altar of caution, I repeat the caption for this article, “Do not Revere Any Image Purported to be that of Jesus Christ”

DISCLAIMER: The Views, Comments, Opinions, Contributions and Statements made by Readers and Contributors on this platform do not necessarily represent the views or policy of Multimedia Group Limited.
Tags:
image purported to be that of Jesus Christ
Philip Afeti Korto