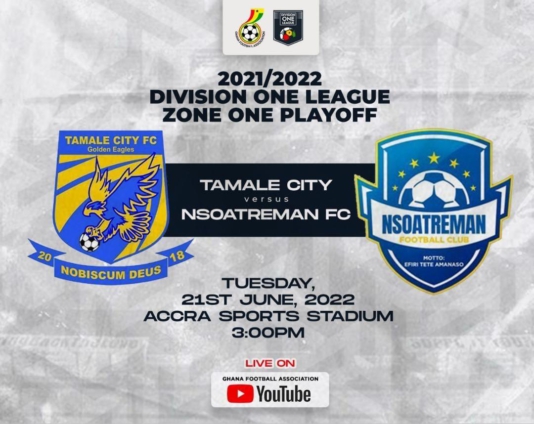 Ghana will for the first time witness Premier League promotion via playoff after Division One League’s Zone One joint-leaders Tamale City and Nsoatreman FC ended the season with same points and levelled on head-to-head .

Both sides lost in their critical away fixtures by a goal and based on the rules stipulated in the regulation of the Division One League, Tamale City’s nine-goal advantage on the log, their path to Ghana’s elite division can only be through a playoff slated for Tuesday, June 21, at the Accra Sports Stadium.

Tamale City could become the second club from Tamale in the Ghana Premier League if they scale this hurdle.

Former Black Stars midfielder, Hamza Mohammed, is in charge of the Citizens and says his side is ready.

“We are very prepared and per the head-to-head we are champions and we should have been preparing for the new season but that is the rules – we lost 1-0 away and we beat them in Tamale,” he said.

Nsoatreman are looking to make their Premier League debut next season as well but are aware of the stumbling block.

Team Manager for the side, Christian Asante, says the Sunyani-based outfit is poised for action this afternoon.

“The morale in camp is very good and high as the boys are determined because this is the biggest platform [some] will have in their life time apart from being a Black Stars player or playing in Europe,” he said.

“The management, the board and everybody is determined for victory. Everything is well planned, we are poised for victory [at the end of the day]. We also entreat the fans to pray for us so that at the end, success will be ours.”