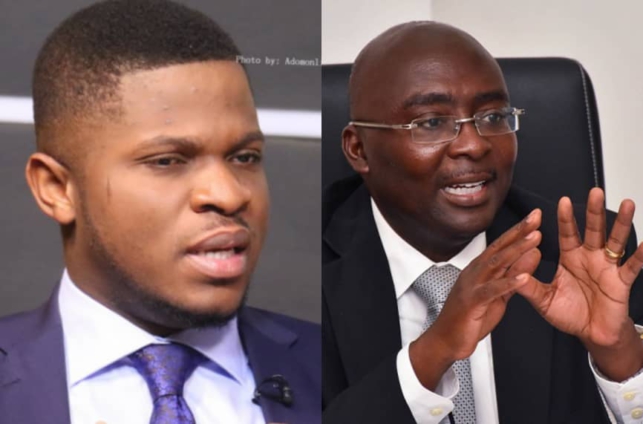 The National Communication Officer of the NDC, Sammy Gyamfi, has reacted to taunts by New Patriotic Party followers for being slapped with a GHȼ500,000 damage in a libel suit.

In a Facebook post on Friday he ridiculed the economic prowess of Vice President Dr. Mahamudu Bawumia, in the face of the recent sharp depreciation of the Ghana Cedi.

Followers of the New Patriotic Party, especially fans of Matthew Opoku Prempeh, MP for Manhyia South and Minister for Energy, have been trolling Sammy Gyamfi since Thursday when a court found him guilty of libel and imposed the damage, in addition to a GHȼ50,000 cost.

However, in the Facebook post, the NDC spokesperson said the legal battle was far from over, and rather asked those taunting him to worry about the national economy instead.

Sammy Gyamfi asked of the whereabouts of the Veep and head of government’s economic management team, who he said has been paraded by his supporters as an ‘economic wizkid’.

He said that no amount of distractions would derail him.

“Knowing your long-standing hatred for me and your determination to see my downfall, I can understand the desperation on display.

“For your information, I remain focused, unshakable, impregnable and unbreakable. None of these things move me. Know this truth and stop wasting your time and data on me.

“The dollar has shattered the 8 and broken the 12. Where is your economic wizkid, Dr Mahamudu Bawumia now?”, portions of the post read.

The comments by Sammy Gyamfi also follow news of the Cedi’s further depreciation against the dollar on Friday.

This development comes within a week after the cedi earlier depreciated against the dollar.

A visit by Joy Business to some forex bureaus indicates that most of the operators are selling the dollar for more than ¢12. They claim supply of dollars has reduced significantly.

Again, the cedi is losing grounds quickly against the pound and euro. Whilst a pound is going for about ¢12.70, one euro is selling at ¢11.10.

Within a week (October 10-October 14), the local currency has lost more than 6% value to the dollar. This means the year-to-date depreciation of the cedi is hovering around 46%.

By this rate of depreciation, the working capital of businesses, particularly manufacturers that depend on raw materials from overseas, have gone down by about 46% since January 1, 2022.

Meanwhile, scores of Ghanaians have taken to social media to bemoan the situation; urging government to take urgent steps to address the consistent depreciation of the country’s currency.

DISCLAIMER: The Views, Comments, Opinions, Contributions and Statements made by Readers and Contributors on this platform do not necessarily represent the views or policy of Multimedia Group Limited.
Tags:
Dr Mahamudu Bawumia
Ghana cedi
Sammy Gyamfi
US dollar