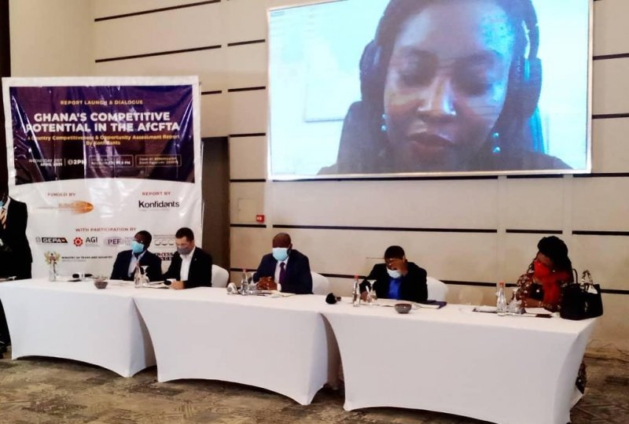 A study commissioned by the Business Sector Advocacy Challenge Fund (BUSAC Fund) has concluded among others that government should ensure that the domestic competitiveness of Ghanaian firms forms the foundation of Ghana’s AfCFTA overall competitiveness strategy.

The report, titled, “Ghana’s Competitive Potential in The AfCFTA: A Country Competitiveness and Opportunity Assessment Report,” was undertaken by research and advisory firm, Konfidants.

The objective of the study is to provide a broad understanding of Ghana’s trade competitiveness in the continental market, map out markets with the greatest potential within AfCFTA for Ghana’s key industries and products, and make recommendations for boosting the country’s performance in the AfCFTA.

With an emphasis on value-added goods only, the analysis focused on seven product groups that were selected in consultation with industry players and government, namely: Agro-processed goods, Plastics, Pharmaceuticals, Mineral Oils, Textiles, Metal Manufactures and Cosmetics.

The Lead Consultant for Konfidants, Mr Michael Kottoh presenting the findings and recommendations, said Ghana’s intra-Africa exports value ranking (out of 54 countries) in the seven products studied is generally impressive.

He said the analysis showed that Ghana had weak comparative advantage in most of the seven export products, Agro-processed goods, Plastics, Pharmaceuticals, Mineral Oils, Textiles, Metal Manufactures and Cosmetics.

The Consultant said on the pure basis of productivity differential between Ghana and its trading competitors, Ghana has revealed comparative advantage in only two of the seven product groups analysed, which were plastics and mineral oils, despite ranking in the top ten in four products.

“The findings show that the overwhelming majority of Ghana’s highest potential export markets are within West Africa,” he said.

On external competitiveness, Mr Kottoh said the ECOWAS market was over-concentrated and would need to utilize AfCFTA to diversify away from ECOWAS into other sub-regional markets.

He said this was necessary because it would enable the ECOWAS markets to become exposed to heightened competition from non-ECOWAS states as a result of AfCFTA.

The Consultant said the good thing, however, was that Ghana currently exports to about 33 African markets, which offered a large export footprint to build on for market diversification and market deepening.

“Outside of ECOWAS, North African markets present more export potential for Ghana than East African or Southern African markets, when it comes to value-added goods,” he added.

He said the estimated potential for value-added goods in Eastern, Southern and North Africa were, however, very low, although AfCFTA was expected to naturally improve Ghana’s potential in these markets.

For domestic competitiveness, he said the cost of credit was Ghana’s weakest point, the country was ranked at the bottom of the list when compared to the top African exporters.

He said the 14.5 per cent policy interest rate in the country as of January 2021 was double the African average of 7 per cent, and also compared unfavorably to 1.5 per cent in Morocco, 3.5 per cent in South Africa, 4.5 per cent in Cote d’Ivoire.

“Worthy of note is that Ethiopia as at 2016 charged 2.4 cents per kilowatt-hour for consumers,” he said.

On recommendation, he called on the Ministry of Trade and Industry to speed up the completion of a clearly defined SMART strategy for AfCFTA implementation and opportunity maximization.

The Consultant said there should be an industry partnerships approach that ensured that Ghanaian companies were collaborating through consortiums and alliances to increase their competitive edge and avoid unhealthy competition against one another in AfCFTA markets.

He said the government must address the high cost of finance by immediately rolling out, in partnership with the financial industry, a subsidized export financing window for players in critical AfCFTA value chains that met a well-defined transparent criteria.