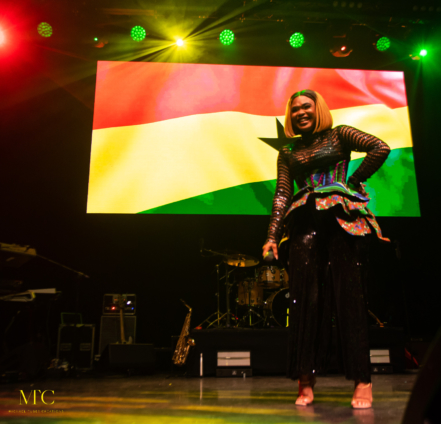 Despite it not being her first time hosting an event in London, the announcement of her O2 Indigo gig came to her as a shock.

That was partly because, she wasn’t given any hint by the organisers of KiDi and Kuami Eugene’s “Live in Concert”, Lynx Entertainment.

Prior to this event which was held in the U.K, she had hosted Akwaaba UK’s “Ghana Party in the Park” at Trent Park, London, in July 2021, and the Red Carpet session of the KAB-FAM Ghana Music Awards UK at Royal Regency, North London, in October 2021.

In December 2021, the host of Matter Dey on Hitz FM had the busiest schedule regarding steering highly recognized events in Ghana.

She hosted the MTN Music Festival at the Grand Arena, where she drove the crowd into a frenzy with her energy and alacrity.

Unlike rapping, the host of Let’s Talk Showbiz on Joy Prime TV delivers an exceptional performance anytime she gets behind the microphone to moderate an event. Her ability to stir up an audience of any kind is absolutely unmatched.

In addition to that, she earned a partnership from the Embassy of Switzerland in Ghana, to help support female disc jockeys in Ghana after a survey by the DJs Union of Ghana make up lesser than 6% of DJs in the country’s creative ecosystem.

In March 2021, Doreen was selected to be among the few females of the 120 members nationwide, to participate in the Board/Academy “3 Music Awards” voting exercise ahead of the fourth edition of the award ceremony.

Her hard work, panache and passion for the entertainment industry in Ghana cannot go unnoticed due to the excellence and professionalism she brings to the table. Her undying support for Ghanaian musicians transcends the borders of Ghana.

Pertaining to that, Stonebwoy, D-Black, R2bees, Sarkodie and the likes have publicly appreciated Miss Avio’s zealousness and contribution to the success of their respective careers.

As 2022 being her 12th year with The Multimedia Group, as well as being the pacesetter for Ghanaian female presenters when it comes to hosting an event at the epic O2 Indigo in London, she stands tall in empowering women in the creative space to soar above their current statuses, break barriers in order to achieve what is meant for them.

Doreen Avio’s longevity and mileage go further to cement her true potential and rank in the Ghanaian entertainment space.

This is not the beginning, but the continuation of a legacy she is building for herself.