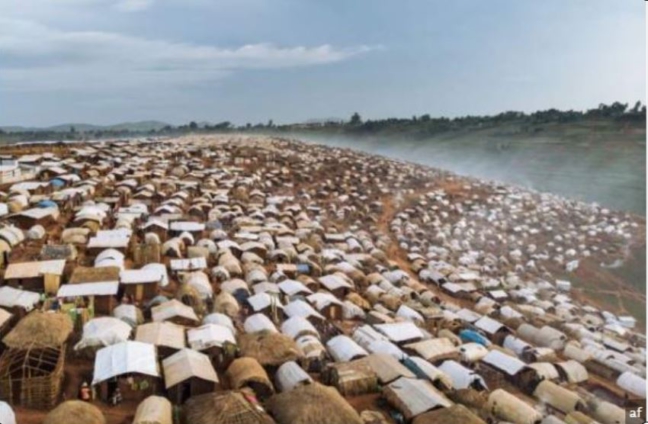 Some 1.7 million people have been forced to flee their homes in Ituri, many living in camps like this set up near peacekeepers

About 60 people living in a camp for the homeless have been killed in a brutal overnight attack in the north-east of the Democratic Republic of Congo.

At around 02:00 local time, men armed with guns and machetes raided Plaine Savo, set up for those forced to flee their homes in the province of Ituri because of inter-ethnic conflict.

The local chief said most of the victims were women and children. Many of them had their throats slit.

“I first heard cries when I was still in bed. Then several minutes of gunshots. I fled and I saw torches and people crying for help,” a camp resident told the Reuters news agency.

Another 40 people have been injured, according to the Norwegian Refugee Council (NRC), which provides aid to the camp.

The Codeco militia has been blamed for the massacre.

Its fighters are mainly drawn from the Lendu farming community, which has been at loggerheads with the province’s Hema cattle herders.

The NRC says there has been a steep escalation of deliberate and targeted attacks by armed groups against displaced people in Ituri.

Since November, nearly 70 people have been killed in raids on five other camps, it says.

“These attacks have triggered new waves of mass displacement and plunged already vulnerable populations into a climate of terror,” the NRC said.

An estimated 1.7 million people have been forced to flee their homes in Ituri since violence began to escalate several years ago.