Dr Bawumia has transformed the Vice Presidency from one of docility to activism – Dr. Etse Sikanku 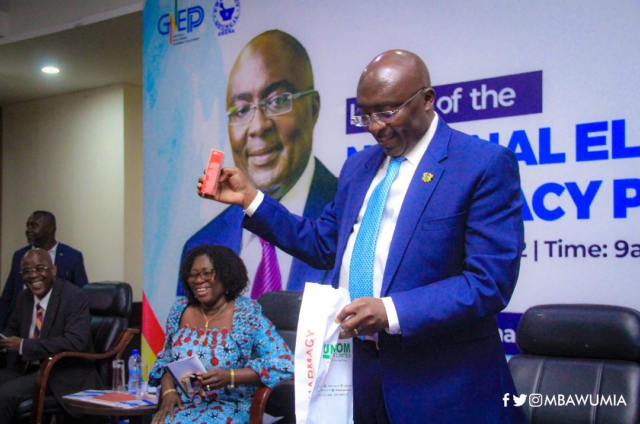 Lecturer and political communication analyst, Dr. Etse Sikanku has lauded the Vice President, Dr. Mahamudu Bawumia for his immense contributions to the Office of the Vice President, which he said, has significantly transformed the hitherto dormant office.

In a write up released on Wednesday, he noted that the Office of the Vice President used to be docile, but Dr. Bawumia has demonstrated leadership qualities and transformed the office “to bring about observable change in the lives of the people.”

“Dr. Bawumia has succeeded in transforming the Vice Presidency from one of docility to activism, symbolic representation to policy implementation and from mysticism to realism. When the history of democratic politics is written in Ghana, Dr. Bawumia will occupy a special place because of the courage, unorthodoxy and aggression that he brought to the position,” Dr. Sikanku wrote in his analytical piece.

“Time and again, he has been at the receiving end of jokes and criticism due to his overwhelming focus on digitization, but he has remained resolute and unwavering in his digital ambitions for Ghana. His political beliefs are rooted in pragmatism, realism and the idea that to seize the moment in a fast-moving world, this country needs to embrace digital know-how in order to improve the economy and better the lives of citizens.”

He continued: “Bawumia’s approach is therefore data-driven and action-oriented with an eye on innovation and reformation. A crucial element in political leadership is the ability to act through the courage of one’s convictions.  By remaining unalterably committed to a cause and persevering despite the odds, VP Bawumia exhibits one of the greatest qualities of leadership: political courage.”

“Through his courage and persistence, he has used the position of the Vice Presidency to bring about observable change in the lives of the people particularly through the framework of digitization. No one can deny the passion and attachment he has demonstrated in making sure Ghana is not left behind in human development, making sure that the gospel of digitization is not only preached but permeates every aspect of Ghanaian life.”

The respected communications lecturer pointed out the effects of Dr. Bawumia’s efforts as Vice President “can be seen in areas such as the digitalization of the operations of the DVLA, much needed enhancements in the school feeding program, the use of drones for the delivery of critical health needs such as blood and medicines, the new lease of life at the ports through the paperless port system, the full operationalization of the Ghana National Electronic Pharmacy.”

The extensive article, which holistically looked at the making of Dr. Bawumia as a modern Vice President, delved into his background as a seasoned banker and economist and his meteoric rise as a running mate to an impactful Vice President.

DISCLAIMER: The Views, Comments, Opinions, Contributions and Statements made by Readers and Contributors on this platform do not necessarily represent the views or policy of Multimedia Group Limited.
Tags:
Akufo-Addo
Constitution of Ghana
Dr Mahamudu Bawumia
Vice President