DR Congo’s leader hits out at Rwanda over insecurity 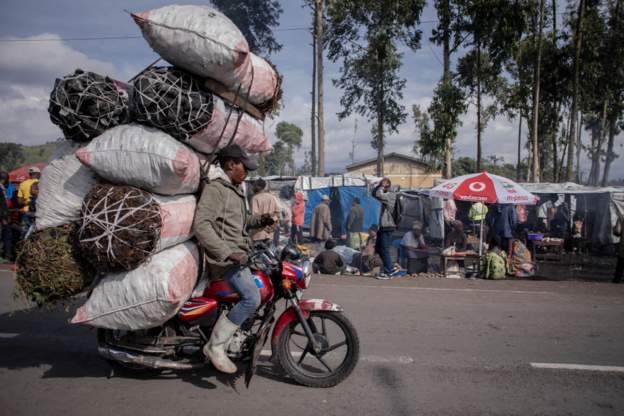 DR Congo’s President Felix Tshisekedi has accused Rwanda of being the source of instability in the region, in a sharp response to comments made by a Rwandan cabinet minister, Claire Akamanzi, at the World Economic Forum in Davos.

“Sorry madam, the insecurity issue we have in the Great Lakes region is called Rwanda,” he said.

Mr Tshisekedi added that “Rwanda is supporting the M23 rebels” to create insecurity in eastern DR Congo – a claim that Rwanda has denied.

He accused the rebels of killing more than 100 civilians in Kishishe to “frighten away” the community from the village, which has “precious minerals in the ground”.

Mr Tshisekedi also said the M23 has not been respecting a peace accord, which required the rebels to immediately withdraw from areas they had captured.

“M23 is still there, they act like they are moving but they are not, they’re simply moving around and redeploying elsewhere, and they stay in the towns that they have captured,” he said.

Speaking at a WEF session on Tuesday, Mrs Akamanzi told Mr Tshisekedi that “if security is indeed a big problem for you, and clearly if you were able to solve it as DRC government or DRC army, you would have done it by now”.

“I believe the solution is in your hands to own the problem but [also] to work with those who can solve it… because security is paramount for investment,” Mrs Akamanzi added.

DISCLAIMER: The Views, Comments, Opinions, Contributions and Statements made by Readers and Contributors on this platform do not necessarily represent the views or policy of Multimedia Group Limited.
Tags:
DR Congo
Insecurity
Rwanda