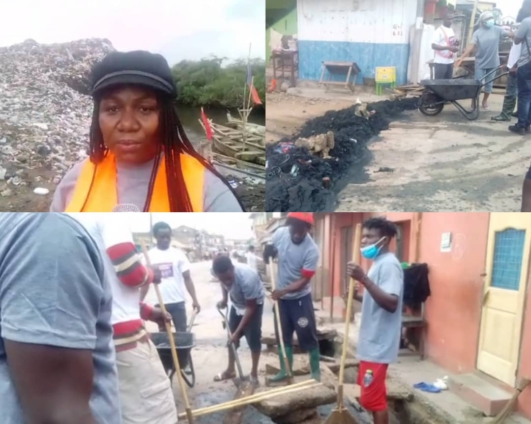 In spite of the fact that government and municipal assemblies have a mandate to ensure that its citizens stay in a clean and safe environment, it is the civic duty of communities  to ensure that their  environments are kept clean.

Motivated by the above, entrepreneurial icon and astute banker and international speaker, Dr Bernardette Hoffman, with support from her friends as well as other natives of the Elmina in the Central region last Tuesday desilted the blocked gutters.

Elmina, also known as Edina by the local Fante, is a town and the capital of the Komenda/Edina/Eguafo/Abirem District.

In addition, volunteers who numbered over 35 youths, swept the major streets of the town, desilted the opened drains that had been blocked with refuse and sand, and ended with a youth engagement forum.

Dr Hoffman noted that waste management had been and remained a big challenge in urban and rural areas especially in developing countries.

“The waste management situation in Elmina, in the central region is very disturbing, hence the call to this duty,” she said during an interview with the media.

Dr Hoffman observed that it had become normal  for  citizens to fail to recognise their role in waste management and become unwilling to  even participate in clean-up campaigns.

A portion of the major lagoon Benya was noted to have been filled with refuse and almost blocking its flow. The community in the absence of an appropriate dump site, is converting the lagoon banks to a dump site. This needs urgent attention so the situation does not get any worse.

The entrepreneur maintained that waste dumps are prime breeding sites for communicable disease through vectors such as rodents, mosquitoes and houseflies, which can exacerbate the break out of food and waterborne diseases such as cholera and typhoid.

The day was climaxed with a brief stakeholder engagement where some youth were encouraged to help keep the community clean each one contributing their quota.

They were motivated to appreciate that their problems could be solved if all stakeholders take on our roles in the shared responsibility for sustainable management of waste at our local level.

Beyond the physical clean up activity, the effort also created a greater sense of unity and friendship among the volunteering youth and organisers.