Drama at public hearing of creation of new regions in Accra 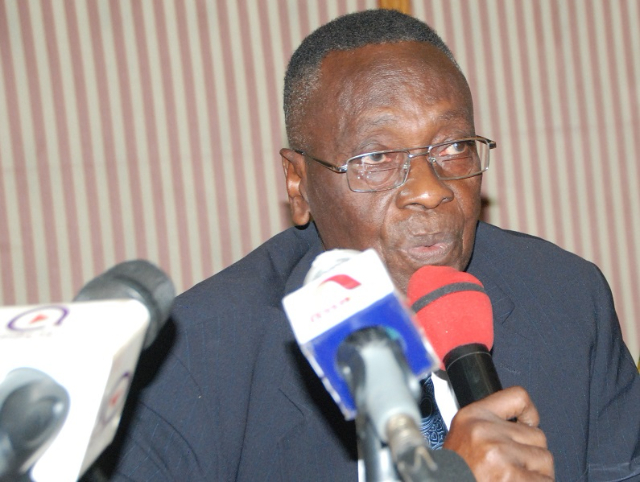 Drama unfolded at the public hearing of the creation of new regions in Accra last Thursday when a middle-aged man kicked against the entire exercise and incurred the displeasure of chiefs and people.

They had gathered to state their case for the creation of the Western North Region.

Aside the heckling, interjections and booing that drowned his submission, the chiefs and Members of Parliament (MPs) of the area, took turns to rebut reasons he cited, compelling him to walk out of the committee hall of the Accra International Conference Centre, where the three-day hearing began yesterday.

The public hearing is the final lap of engagements to be held by the commission of inquiry for the creation of new regions after it held in-camera hearing of petitions from six petitioners at the Osu Castle last year followed by regional hearings.

Chaired by Justice Stephen Allan Brobbey, a retired Supreme Court judge, the nine-member commission is scheduled to hear submissions from petitioners and other groups seeking the creation of six more regions in the country.

They want Western North carved out of the Western Region; Oti Region split from Volta Region, Gonjaland and another region fragmented from Northern Region; Brong Ahafo divided into Ahafo and Bono-East Regions.

The drama started when the man, who introduced himself as Charles Amoah Asante, a New Patriotic Party member in the United States of America (USA), like other people, was given the opportunity by the moderator to express his view after a presentation on the need for the new region.

Citing some studies, he wondered if the country had thought of the implications of the creation of the new regions when 70 percent of the revenue was spent on salaries for public sector workers which would increase when new regions were created, leaving a small portion for development.

While explaining other reasons for saying the move was counterproductive, the heckling from the people and chiefs, who had filled the room to capacity, gathered momentum, grew louder than the sound of the speakers and overshadowed his submission.

When calm was restored after a few minutes, the President of the Western Regional House of Chiefs, Ogyeahoho Yaw Gyebi II who was the first to rebut, said Mr Asante’s comments was an attack on the establishment of the committee.

He said Mr Asante should have rather petitioned the committee instead of attacking it at the public hearing, adding that the platform was meant for petitioners to state their case for the creation of new region and not to hear contrary views.

The Western Regional Minister, Dr Kwaku Afriyie, who spoke in his capacity as the MP for Sefwi-Wiawso constituency, explained that though a huge part of revenue went into salaries, the public sector contributed significantly to the development of the country.

He said the creation of the Western North Region would help move the part of the existing region from perpetual neglect, a point which was reechoed by  others including chiefs, MPs,  chief executives, student group representatives.

Earlier in a presentation on the need for the new region, Retired Colonel Anthony Aduhene, representing the petitioners, cited the economic potential of the part of the region and stressed that its independence would accelerate its development.

Pursuant to Article 5 of the 1992 Constitution of Ghana, President Akufo-Addo on October 19, 2017, inaugurated the Commission to inquire and make recommendations on the alteration of regional boundaries after he had referred petitions to the Council of State for advice.

The commission with six months mandate which expires this month is expected to present its report to the President and if approved, a referendum on the creation of the new regions will be held by the Electoral Commission.