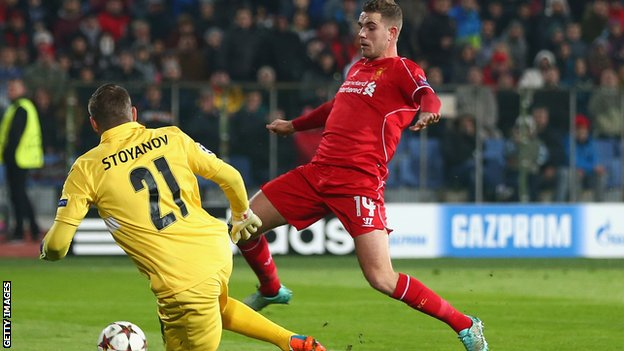 Liverpool conceded a late equaliser at Bulgarian champions Ludogorets – but are still just a win away from reaching the Champions League last 16.

Jordan Henderson steered Liverpool ahead at the far post, before Georgi Terziev headed in the equaliser.

Liverpool will still qualify if they beat Basel at Anfield next month.

Despite an unconvincing performance in Bulgaria, Brendan Rodgers's side remain in control of their European destiny after Basel were beaten 1-0 at reigning champions Real Madrid.

Basel's defeat means the Reds are two points behind the Swiss side and will join the Spanish giants in the knockout stage with a win in their final group match.

Liverpool had lost their previous four matches in all competitions and before kick-off Rodgers urged his players to kick-start their faltering season with a vital win.

But their performance in near-freezing conditions in Sofia will have done little to encourage the Anfield side that an upturn in their fortunes is on the way.

The visitors appeared to lack the confidence to cut through the ponderous Ludogorets backline and were once again uncertain in defence when the home side poured forward.

Goalkeeper Mignolet has faced mounting criticism during Liverpool's recent slump, with Reds legend Bruce Grobbelaar claiming his performances are one of the main reasons Rodgers's side are struggling.

And the Belgium international opened himself up to more of the same when he gifted a third-minute opener to the home side.

Home midfielder Marcelinho's low 20-yard shot should have been easily gathered, but the Reds keeper spilled it into the path of striker Dani who bundled in.

But Lambert, who netted his first Reds goal inSunday's 3-1 defeat at Crystal Palace,levelled when he pounced on some flat-footed defending to steer into the bottom corner.

England forward Raheem Sterling had been lacking the sharpness of his early-season form in recent weeks, but looked back to his best as he orchestrated Liverpool's brightest attacking play and set up Henderson's goal with an incisive cross.

However, the youngster also missed a golden chance to put the game beyond the home side with 10 minutes left, steering straight at Ludogorets keeper Vladislav Stoyanov when clean through.

Liverpool's current lack of self-belief was clear to see in the closing stages, the visitors retreating nervously as the home side pressed.

But although Terziev's far-post header earned Ludogorets a deserved point, it does not alter Liverpool's task against Basel on 9 December. 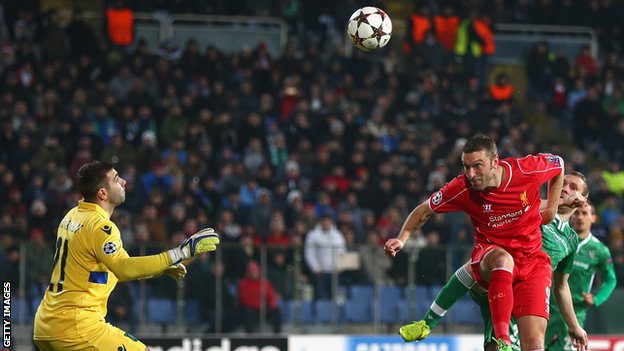 Rickie Lambert is the first English forward to score for Liverpool in the tournament since Peter Crouch on 28 November 2007. 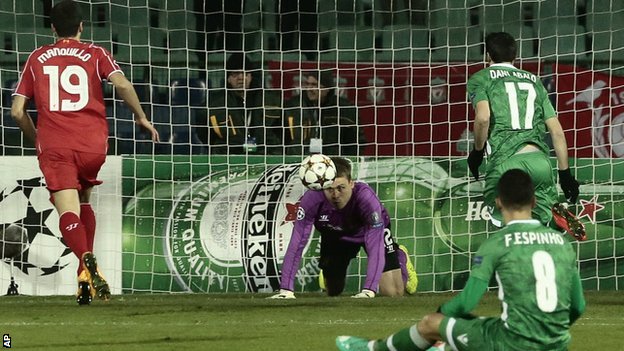