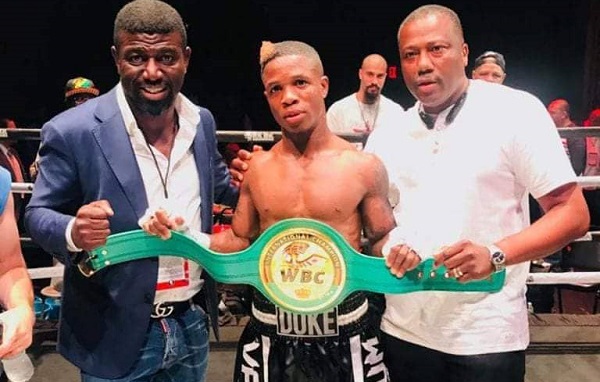 On the dawn of September 26 2020, I had the unfortunate experience of watching yet another Ghanaian crumble at the opportunity to win a world title – Duke Micah one of the best prepared.

The 2012 Olympian lost in rather embarrassing style to the WBO bantamweight champion, John Riel Casimero at the Mohegan Sun Casino in Uncasville. With the wealth of experience, the previously confident Micah was subjected to some battering to wrap it all up some three rounds into the scheduled 12-round journey.

For those who have followed Micah’s career, it came as a tough dose of shock because he had seen a lot more and shouldn’t have gone down the way he did. Then I further reminisced on other Ghanaians who suffered similar humiliation in the ring in world title fights.

Patrick Allotey was rendered a fourth-round casualty in the WBO super welterweight championship against the champion Jaime Munguia on September 14, 2019.

The difference with Micah however, was that he had a better foundation and fought more credible opponents en route to getting the world title shot.

So what are the realities confronting worthy contenders like Micah on big days in the ring? It looks like there is more to his case than meets the eye. Micah revealed in an earlier interview with me that his managerial issues affected him to the extent of a total loss of confidence.

The 2012 Olympian told me in an earlier interview on the Joy News channel that he almost quit, “Everyone knows that I am one of Ghana’s best boxers currently but I wasn’t myself and I almost gave up because of issues out of the ring. When I returned home I refused a cheers party to welcome me because I felt I had let the fans down,” he revealed.

“In America, you have to go and beg for the gym and you have to pay. So I asked myself where was the management?” he added.

According to him, his trainer Andre Rosier was very supportive and helped to secure the Sadam Ali Gym for training. From the account given me in the interview, Duke Micah was psychologically defeated even before mounting the ring to face Casimero. This was born out of frustrations with his manager Michael Amoo Bediako.

The UK-based manager through his lawyer, Neil Sibley of Valemus Law reported the boxer to the Ghana Boxing Authority who in turn took up the matter through its Disciplinary and Arbitration Committee. The boxer has also sent his version of the story to the GBA for consideration.

The problem seems even bigger

According to Micah he hardly knows the details of the contract he has signed with his manager Mr Michael Amoo-Bediako of Streetwise Management. The fact, however, is that the boxer has a contract which bears his signature that runs out in 2022. That becomes a big worry considering the risks involved. The boxer is alleging he hardly knew Mr Kenneth Bouhari, who signed as his witness in the contract.

From my checks, the latter also claims the boxer was very aware of the arrangement. Clearly, the matter is far from settled as all parties involved are sticking to their guns. The longer this matter drags on the tables of the Ghana Boxing Authority, the more complicated things will get for Micah, who needs to fight not only for economic reasons but for career goals as well.

“I cannot read and because of that I told my manager that I needed someone to witness for me. I told him I did not know what was in the contract and did want any problems because of previous experiences.

Mentally I need some backup and support. I want my country to support me. Even if the government will not directly do that I will be grateful for some sponsorship to push us, so that I will know that the nation is backing me. I didn’t even know that people were back at home watching my fight,” Micah said in the interview.

“I have learnt a lot from all this. I will not trust any human being but only God. I have been through this before and because of that I had lost a lot of trust.”

Similarities with the Joshua Clottey example

For years, Joshua Clottey was under the management of Base Sports Management, based in the UK and run by Mr Freddy Annan who had built a good resume in managing Ghanaian sporting talents. Clottey complained several times of being cheated by Mr Annan, his manager who sometimes secured him bouts with low purses and also served the interest of promoters rather than his boxer.

He also claimed that the UK-based boxing manager hardly adhered to terms of their contract. Of course, Mr Annan had his side of the story and insisted the boxer was very ungrateful. The drama took nasty turns with heated phone arguments, hot exchanges and threats. The boxer as a result of frustrations sought to move on to work with another manager, US-based Vinny Scolpino but this did not come easy.

Due to an existing contract agreement with Mr Annan, there were complications as the latter didn’t easily let go. Eventually, when Joshua threatened to denounce his Ghanaian passport for an American one, the Ghana Boxing Authority (GBA), then led by Lawyer Moses Foh Amoaning had to intervene.

He rescinded his decision and eventually got to work with the Italian American manager Scolpino after a buyout. Under the latter and Bob Arum’s Top Rank Promotions, Clottey had his biggest achievements to date as well as his biggest paydays.  This is not to say that the business relationship was a perfect one. They also had their own set of issues during the period.

Why Micah must learn from the Clottey episode

The lessons to be learnt are two-fold. From the grounds of human rights, the young boxer must fight for what is duly his within the rules of the sport. Other emerging boxers who are monitoring this matter must understand that education is key. If you are not educated, surround yourself with as many who can advise and help avoid stepping on such land mines.

There is also the angle of compromise. Hypothetically if Micah manages his emotions and hurt from all that has gone on and sees out the remainder of his contract, it could help him a great deal. This is especially because COVID-19 wiped out the better part of 2020 in terms of boxing promotional activity. Some valuable time has been lost, and both parties could have made good of that time if covid-19 hadn’t struck.

When Joshua Clottey signed with Vinny Scoplino, they had issues but one way or the other, they found a meeting point. Even in the case of his former manager, Mr Annan, he had to ensure some months of frustration before eventually weaning himself off. The other unavoidable truth about the sport of boxing is that it is a torrid ground of bulldozing and one must have a tough skin to survive.

The boxer is willing to bounce back and is scheduled to travel back to his base in the US. One good step he took was to make peace with his former trainer, Lawrence Carl Lokko, head trainer of the Bronx Boxing Gym in Accra.

The two had been on a warpath due to some allegations made by the boxer against the trainer complicated with some social media posts. That episode is behind the two now and the boxer has been seen training in the Bronx Gym in James Town Accra again with Carl Lokko.

He also expressed the desire to jump into the ring and vie again, with the condition being that all these issues are sorted out.

From his own words, Micah clearly requires to be psyched up by a professional to transform the memory of the September 26 gloom into a point of motivation to fight back.

The good thing is that at least in all of this, he is content with what he earned from the bout and what his environment at home is doing for him. Micah feels happy about the fact that he has purchased a small house and a car and is able to provide for the needs of his two kids and girlfriend.

“I promise Ghanaians fireworks in 2021. What has happened in the past is gone and I am glad I can see my kids and my girlfriend around me. It makes me feel good. All I need now is support from the government,” he said. In all the turbulence, something positive can emerge and I hope Micah will open his eyes and see.