Each Ghanaian owes ¢7,000 more than in 2016 according to current debt stock – Mahama 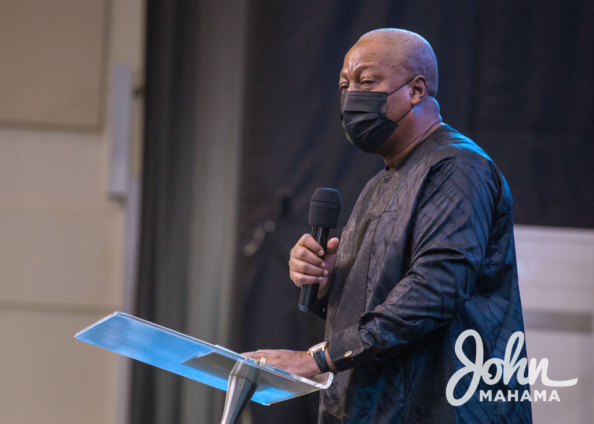 The 2020 NDC Presidential Candidate, John Dramani Mahama, says the debt stock for each Ghanaian has been increased by 7,000 cedis since President Akufo-Addo took office in 2017.

According to him, Ghana’s Debt has ballooned to unsustainable levels, forcing the government to use tax revenues to service debts.

Speaking at NDC’s Professionals Forum lecture series on Monday, Mr Mahama said in 2016, a relative of the President calculated how much each Ghanaian owes using the nation’s debt stock when he (Mr. Mahama) was President.

The person, he said, concluded that the Mahama administration had caused every Ghanaian to owe GHC1700 and thus he similarly carried out the same exercise with the debt increase in mind.

“The good thing about social media is you should be very careful about what you tweet or say because it will come back years later to haunt you. I saw a relative of the President in 2016 had calculated how much I had added to the public debt.”

“He came to some 28 billion or something like that conclusion and divided it by 30 million Ghanaians said that I have caused every Ghanaian to owe GHC1,700. So I took my pen and I did the same calculation. And his cousin the President has added GHC7,000 debt to every Ghanaian,” he said.

The NDC’s Professionals Forum lecture series was on the topic “The State of Ghana’s Economy-The Scorecard”. The lecture was delivered by former Finance Minister Seth Terkper.

Mr Terkper, during his presentation, argued that the NDC administration left a stable economy with multiple streams of income and not an economy in a bad state.

Mr Mahama addressed the gathering after Mr Terkper launched a scathing attack on the government’s handling of the economy.

He criticised the government for citing Covid-19 as the whipping boy for the current state of the economy.

The 2020 NDC presidential candidate related that just like Covid-19 deals seriously with persons with underlying conditions, its impact has been devastating to Ghana because of the bad economic management.

Government, he said, has neglected calls by people, including himself, to hold a forum to seek alternate views on how to save the economy from collapse.

Mr Mahama alleged that the nation is currently experiencing unprecedented levels of corruption, a situation that can only be dealt with, if this government is voted out to enable another to hold the present appointees accountable.

DISCLAIMER: The Views, Comments, Opinions, Contributions and Statements made by Readers and Contributors on this platform do not necessarily represent the views or policy of Multimedia Group Limited.
Tags:
Economy
John Mahama
President Akufo-Addo