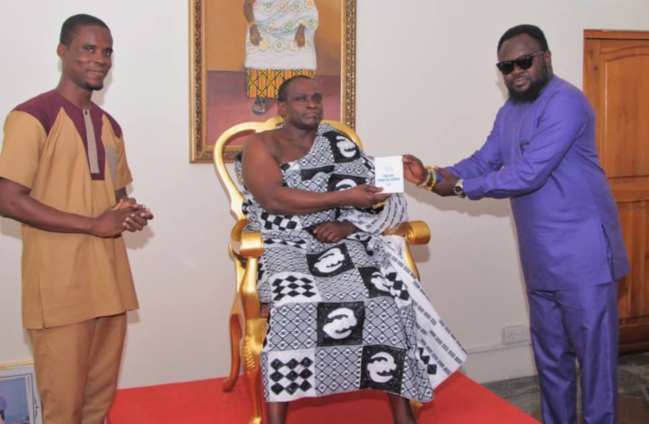 Eastern Region GJA has co-opted the Omanhene of New Juaben Traditional Area, Daasebre Nana Kwaku Boateng lll, as a member and a patron

The Eastern Regional branch of the Ghana Journalists Association (GJA) has co-opted the Omanhene of New Juaben Traditional Area, Daasebre Nana Kwaku Boateng lll, as a member and a patron.

This took place when the regional leadership of the Association paid a courtesy call on him at the Yiadom and Hwedie Palace to welcome the Chief and reaffirm GJA’s commitment to supporting the development agenda of New Juaben.

During the visit, the 2017 GJA Code of Ethics was presented to him as a symbol of his admission into the Association as a patron and also to guide him on ethical issues relating to media practice and journalism.

The Eastern Regional Chairman of the GJA, Maxwell Kudekor, indicated that the conferment of the membership and patron status on the Chief was in pursuant to Article 16 (d) (v) of the GJA Constitution 2004.

He said the provision mandates the regional executives to co-opt members and resource persons to the Association.

He called on the Traditional Council to deepen its media relations in order to continue a the already-existing cordial working relationship with the media.

Mr Kudekor underscored the need for journalists to use their medium in upholding the sanctity and dignity of traditional authorities to promote development.

The Eastern Regional GJA President was optimistic the Omanhene will support journalism and promote independence and freedom of the press.

On his part, Daasebre Nana Kwaku Boateng lll accepted the offer and pledged his support for the GJA and the media, adding that his doors are open to all and sundry who wish to come to him.

According to him, the development of New Juaben should be a priority to all.

He, therefore, advised the media to be professional and ensure decency in their content while promoting peace.