EC insists no verification, no vote in Talensi by-election 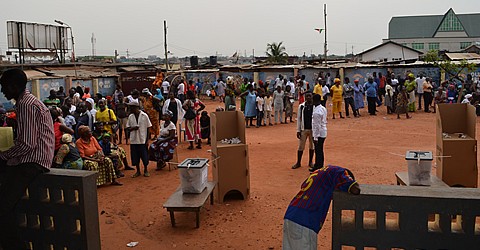 The Electoral Commission has emphatically stated that no electorate would be allowed to vote if his or her fingers are not biologically verified by the biometric machine in tomorrow’s by-election in Talensi.

About 39,000 registered voters are expected to cast their ballot in 74 polling stations to elect a Member of Parliament who would replace Robert Mosore.

The Talensi seat held by the NPP became vacant when Robert Mosore resigned after his enskinment as Tongo chief. Eight persons are now vying for his seat.

The issue of no verification, no vote became an issue for contention at the landmark Supreme Court election petition after the 2012 general elections.

Guided by that, the Upper East Regional Chairman of the Electoral Commission, James Arthur Yeboah told Joy News Monday that once the machine fails to pick the fingers and establish the authenticity of a voter, he or she cannot vote.

“Let me make it clear, if your finger is not picked you cannot vote,” he stressed.

All political parties and persons contesting tomorrow’s by-election have been told about the unbending stringent rule, he said. “[There are]No serious issues we need to resolve, everything is on cause,” he indicated EC's readiness for tomorrow.

The Electoral Commissioner there pointed out that they are “winding up preparation for the election”. Ballot papers, biometric machines and all the necessary electoral materials have been put in their respective boxes and sealed, Mr. Yeboah noted. They would be dispatched to the various polling stations tomorrow morning, he added.

He said all biometric machines to be used for Tuesday have been worked on by EC’s technicians, and assured, “I believe we are using a better device now”.

However, to avoid a recurrence of 2012 elections, where voting was postponed for a day after many of the election machines developed fault, two machines would be dedicated to each polling station to emphasize the Commission’s determination to ensure that everyone who casts his or her vote is verified.

Owing to that, Mr. Yeboah warned voters to watch “what they do with their fingers” so that they are not deprived by the machine.

Meanwhile persons whose fingers are not recognised would be noted down by the EC officials so that their data would be worked on to enable them vote in the next election.

Candidate of the governing NDC Benson Tongo Baba told Joy News he expects to win more than 20 thousand votes. He is confident of winning the seat and has ruled out any surprises.

The constituency has been perceived as a safe seat for the NDC, but NPP’s Thomas Duanaab Awuni says it is a “mistake to describe the seat as a safe seat for NDC”. A seat cannot be safe for a party if the figures of the losing parties outnumber that of the winner, he explained.

He talked about “broken down educational system” where the best BECE candidate obtains aggregate 20 which “shows education there is collapsing”.

He is hopeful his campaign on improving education in the constituency will win him the election.

The Progressive People’s Party has also fielded Joseph Toatoba as its parliamentary candidate. He believes his promise of creating jobs and wealth is enough to swing votes his way.