EC must not be appointed by ruling governments - PPP flagbearer - MyJoyOnline.com

EC must not be appointed by ruling governments – PPP flagbearer 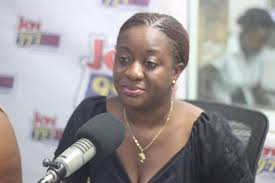 The Presidential Candidate of the Progressive People’s Party says the Constitution must be reviewed such that ruling governments will not be responsible for appointing Electoral Commission officials.

Brigitte Dzogbenuku explained that EC appointments by ruling parties raise suspicion over the credibility and neutrality of the Commission.

“Non-transparency of the EC is a fundamental thing we need to deal with especially with rumours that it is in bed with a political party. This should teach us that the constitution needs to be reviewed so that no EC [official] is appointed by any government in power. It should be a process that will be trusted by every Ghanaian,” she said.

She made the comment during a courtesy call on the Asantehene, Otumfuo Nana Osei Tutu II at the Manhyia Palace, as part of her campaign tour of the Ashanti Region.

During her visit, Ms Dzogbenuku proposed an appointment system where potential EC officials are selected and vetted by parliament.

Although she admitted that there were issues of mistrust with the Electoral Commission, she however, entreated political party leaders to have some level of trust in the electoral process for the sake of peace.

“For the peace of this country, let’s trust the process and make sure the best thing comes out of it,” she added.