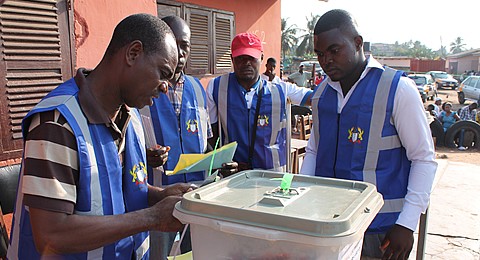 Staff of the Electoral Commission (EC) have resolved to call a nationwide strike on February 22, 2016 to protest poor service conditions.

Joy News has intercepted a copy of a strongly worded resolution passed by the EC Senior Staff Association on behalf of the entire staff detailing a series of actions designed to cripple activities of the Commission.

They are hopeful the strike will put pressure on authorities to address their grievances.

They say "all salary negotiations undertaken with the relevant institutions and authorities since 2012 have yielded no resolution."

Below is the full letter addressed to EC Chair, Charlotte Osei.

RESOLUTION OF THE DIVISIONAL UNION AND THE SENIOR STAFF ASSOCIATION OF ELECTORAL COMMISSION AT A JOINT EMERGENCY MEETING HELD ON TUESDAY, 19THJANUARY, 2016 AT THE HEAD OFFICE, ACCRA

We the undersigned and leaders of the Union and the Senior Staff Association, on behalf of the entire staff,

Having met on Tuesday, 19thJanuary, 2016, at the Head office and dispassionately and thoughtfully considered and dilated our conditions of service in general, but with special emphasis on the low salary levels,

Noting that, all avenues for resolution have been exhausted,

Realizing that all salary negotiations undertaken with the relevant institutions and authorities since 2012 have yielded no resolution,

Realizing that the payments of allowances after every salary negotiation are but only window dressing of the real problem,

Mindful of our economic and social security as employees after retirement,

Determined to build for ourselves and our families through all legal and legitimate means a happy, comfortable and restful future and not depending on families and relations,

Believing that our humble and meek posture in all negotiations have been taken to be a weakness and thus not taken serious,

Pledging to conduct our affairs within the constitutional prescription, and

In the exercise of our constitutional right as employees;

Do hereby resolve and be unequivocally be resolved that;

a) On 8thof February, 2016, the entire staff of the Electoral Commission will raise red flags in all Commission's establishments and vehicles as a sign of our dissatisfaction and aversion of the state of affairs

b) On 15thFebruary, 2016, the entire staff will embark on a sit-down strike, and

We write this to bring to your notice and attention this roadmap of our intended actions.