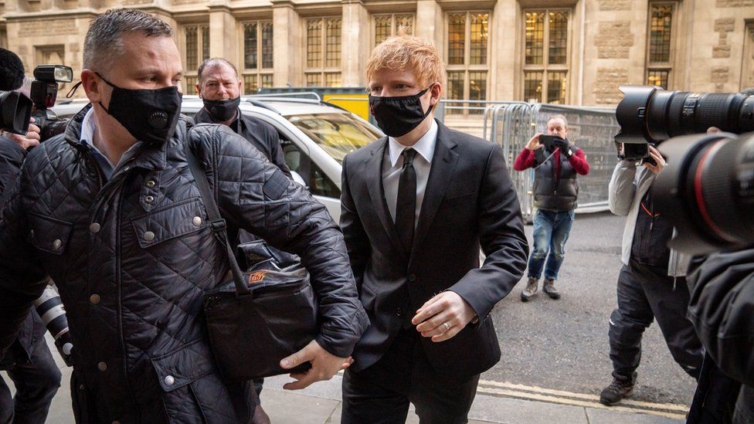 Ed Sheeran has told the High Court he does not “borrow” ideas from unknown songwriters without credit.

The singer-songwriter has been accused by two other songwriters of copying parts of his 2017 hit Shape Of You.

Sheeran denied this, telling the court he had cleared parts of songs with “lots” of unknown artists.

Shape of You was number one for 14 weeks in the UK in 2017, becoming the best-selling song of the year around the world.

Chokri and O’Donoghue claim the song’s “Oh I” hook is “strikingly similar” to part of their track Oh Why, which was released by Chokri under the name Sami Switch in 2015.

On Friday, their barrister Andrew Sutcliffe QC claimed Sheeran “borrows ideas and throws them into his songs, sometimes he will acknowledge it but sometimes he won’t”.

But Sheeran denied the claim that he is a “magpie” who lifts other people’s work without acknowledgement, pointing out that he has often shared credit with lesser-known artists, including Shivers and Visiting Hours, and a song that sampled an “unknown composer’s” work from Buffy The Vampire Slayer.

“All those examples are not famous artists that we’ve cleared songs with and that’s what I have to say on that,” he told the court.

Sheeran created Shape of You with co-writers Steve Mac – real name Steven McCutcheon – and Snow Patrol’s Johnny McDaid, both of whom were also in court.

After its release, Sheeran added the team behind TLC’s 1999 single No Scrubs to the song’s writing credits after some commentators pointed out similarities.

On Monday, Mr Sutcliffe told the star: “The evidence is overwhelming that at the time of writing Shape of You, your songwriting process involved collecting ideas.”

Sheeran replied: “You say it’s overwhelming, I don’t agree with that.”

In written evidence, the singer said the contested element of Shape of You was “very short”, and the relevant parts of both songs were “entirely commonplace”.

He said: “Even so, if I had heard Oh Why at the time and had referenced it, I would have taken steps to clear it.”

He added: “I have always tried to be completely fair in crediting anyone who makes any contribution to any song I write.

“I do refer to other works on occasion when I write, as do many songwriters. If there is a reference to another work, I notify my team so that steps can be taken to obtain clearance.

“I have been as scrupulous as I possibly can and have even given credits to people who I believe may have been no more than a mere influence for a songwriting element. This is because I want to treat other songwriters fairly.”