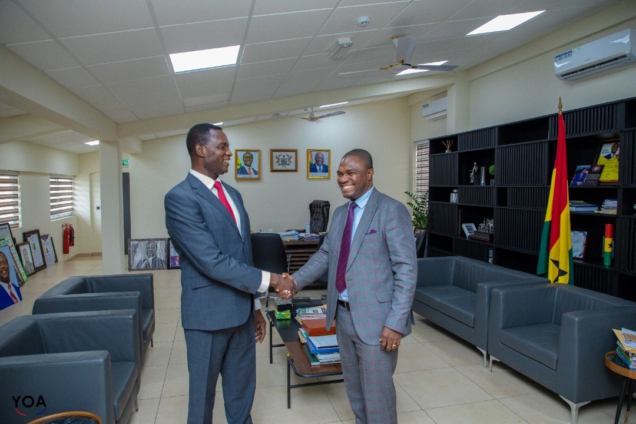 Speaking at a conference for directors of education in Accra on Tuesday the sector minister maintained that the new GES boss is eligible and competent for the work.

Unlike claims suggesting Dr Nkansah has always been a banker, Dr Adutwum said the former has taught in almost all the levels of education in the country, from basic to tertiary schools.

“He [Dr. Eric Nkansah] has taught in basic schools, he has taught in secondary schools, Geography, contrary to what you heard. Like some teachers, he left to go and do some banking.

“He got bored with banking and went to the university to teach, and has taught for over ten years at the Kumasi Technical University.

The appointment of Dr Eric Nkansah as the new Director-General of GES was met with opposition, with major teacher unions urging President Akufo-Add to rescind the appointment on grounds that he is not a professional teacher.

The Minority in Parliament also waded into the controversy and supported the claims made by the teachers’ unions including the National Association of Graduate Teachers (NAGRAT).

The deputy Ranking Member on the Education Committee of Parliament, Dr Clement Apaak, also alleged that the dismissal of the former Director-General Prof Opoku-Amankwah was due to the frosty relationship he had with the Education Minister.

But Dr Yaw Adutuwum has said they are false.

He added, “Another responsibility he [Dr Eric Nkansah] has also handled very well was the fact that he was my lead person for all labour negotiations. So the union leaders know him more than me.”

“He has been working with them on labour negotiations. He was the Ministry of Education’s lead person for the negotiation of COLA.”

Meanwhile, the acting Director-General of the Ghana Education Service (GES), Dr Eric Nkansah, has assured the government of his readiness to work very hard to uplift the image of the Service and improve education in the country.

He also pledged to work diligently with all the stakeholders including the teacher unions, agencies and other professional bodies in the education space.

According to him, having taught at various levels of education and also with experience as a Director at the Education Ministry, he is familiar with issues relating to education development.

This, he noted, places him in a better position to help improve the sector.

Dr Nkansah gave the assurance on Monday when he introduced himself to the Education Minister, Dr Yaw Osei Adutwum as he assumed office after his appointment by the President last week.