Edwinology’s Lab: Those who want us to give Charlotte a carrot but not a stick

The constitutionally-created jobs do not exist so that some families can eat right. They exist so that our democracy can sleep tight. And when our republic cannot sleep, some public officers must not eat.

In July 2017, our democracy could not sleep because two Electoral Commissioners got nasty in the media. Well, thankfully, it won't happen again.

But what is happening are attempts to water down the gravity of the infractions the same way passengers throw away a sachet and say oh, that's just one litter until the rains come down to show the direct link between singular folly and spectacular flooding.

E-Lab won't be interested in talking up the gravity of the infractions because when a people do not want to take their laws seriously after telling the constitution to take it seriously, we are in a hopeless situation of convincing a people that their own laws are awfully lawful.

But the Lab would only point out that the one who will be very angry at this excuse of small errors is the accused – Charlotte Osei.

Those who want us to use a carrot approach in addressing Charlotte's errors but not a stick would really get a stick from her.

She would be livid if you told her even calmly that breaching procurement rules even those under-aged minor ones are not serious.

For the sacked Electoral Commissioner would remind us of her good old days when her thick lenses magnified ineligible and negligible on the presidential nomination forms and found those who want to be president wanting.

With such fond reminiscing smile, she will remind those small-errors-don't-matter people of Dr Paa Kwesi Nduom's futile five minutes to appeal to her after he was disqualified.

And so when judges in the court of public opinion have to consider a petition listing allegations against carrot-hater Charlotte, they cannot suddenly complain of river-blindness or glaucoma and struggle to see the wanton wrongs.

When the brilliantly blessed Kweku Baako says the basis for the Commissioner's removal is an overkill, the only person who won't applaud him is Charlotte Osei.

And then, of course, there is the NDC reaction late in the night, calling on Ghanaians to hit the streets after the sacking was announced.

In one minute, the party became what it has said is unbecoming of a President- a weak man who cannot deal with vigilantism.

It was the weakening of our former vice-president at the hands of death that saved all of us from the practical expression of party-sanctioned lawlessness.

For if the NDC had proceeded, its vigilantism would vindicate only the one respected man the NDC tasked to find out why they lost the 2016 general elections. For Prof. Kwesi Botchwey returned from his search to say the party's intellectual vanguard is dead.

And in a sense, the sudden passing of our late Vice-President is a very morbid expression of how the intellectual vanguard of the NDC is dead.

How the NDC can scream anti-vigilantism slogans at the government during the day and become a pro at vigilantism late in the night is…£$?%$$^&**()!!"£$!!! 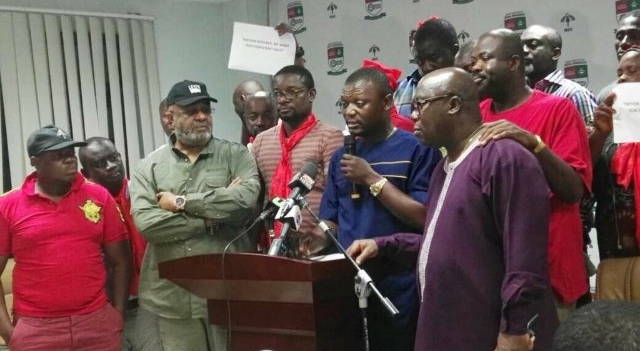 E-Lab generally wants to leave the NDC to its devices because her vices don't come at a direct cost to my taxes.

What has happened at the Electoral Commission is one woman's wrapped understanding of power. That the President's paper which conferred legitimacy on her is enough. There is constitutional legitimacy, political legitimacy and popular legitimacy. Charlotte got only one – the first and never progressed beyond this. Legitimacy is bestowed by a paper, deepened by political tact and preserved by public endearment.

If paper is power, then Kingdom Books, importers of A4 sheets, would really have a kingdom.

We can answer Mr Baako's claim to a conspiracy by explaining that it will take exactly a conspiracy to bring down an Article 71 office holder like judges in Anas's video and we can answer Nana Oye Lithur's I-Stand-With Charlotte by pointing out that she does not underSTAND.

Reason stands, folly floats. And if she has nothing reasonable to add to the debate beyond a hashtag, then she is not standing with Charlotte, she is floating about like some departed spirit denied celestial peace.

And we can answer Charlotte's Instagram post in which after breaking procurement laws, she is now quoting a Psalm about the Lord being by her side. Side? Side? Side eh? Our Lord is not a side chick.

This entire attempt to explain away Charlotte's abuse of office and public trust has all the hallmarks of E-Lab's great worry about our republic.

That disgrace, demotion and jail is for the poor, the lawyerless and the fool. That the elite are too elitist to elicit our disdain, rebuke and even prosecution.

That by their position there is always a justifiable reason for their waywardness because their position is too high to be wayward. Their status has an in-built insurance policy against jail or public disgrace.

Those who stand with Charlotte Osei cannot stand Georgina Amankwah just as Lauretta Lamptey cannot stand them too for this support she never got. And in all these instances, the only common stance is hypocrisy.