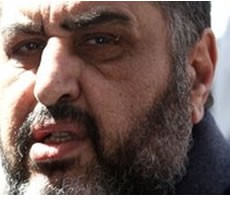 Mohammed Mursi has been sworn in as the country’s first civilian, democratically elected president at a historic ceremony in Cairo.

He promised to respect the constitution and the rule of law, and to protect the people of Egypt.

He is now due to speak at Cairo University before going to an army base for the handover from military rule.

On Friday, he praised crowds in Tahrir Square, the focal point of protests that ousted Hosni Mubarak last year.

Mr Mursi swore a symbolic oath before thousands of people who had gathered to protest against decrees issued by the country’s ruling Supreme Council of the Armed Forces (Scaf).

The military stripped the presidency of many of its powers in recent weeks.

However, Mr Mursi told supporters: “I promise you that I will not give up on any of the powers given to the president.”

He promised to be a president for all Egyptians, saying: “The revolution must continue until all its objectives are met.”

At every stage Mr Mursi has moved to reassure those nervous about the Muslim Brotherhood, both at home and abroad, says the BBC’s Jon Leyne in Cairo.

It is a mixture of populism and pragmatism that he is going to need for the battles ahead, our correspondent adds.

Mr Mursi took his oath of office about half an hour later than scheduled at the constitutional court – not as originally planned the parliament, which was dissolved by the Scaf last week.

The assembly, elected last November, was dominated by the Muslim Brotherhood-backed Freedom and Justice Party (FJP) and other Islamists.

On Friday, Mr Mursi also pledged to work for the release of civilians detained by the military, and to seek justice for those killed and injured in last year’s uprising.

He also said he would work to free militant Islamist Omar Abdel-Rahman, imprisoned in the US over the bombing of the World Trade Center in New York in 1993.

At one point Mr Mursi opened his jacket to show the crowd he was not wearing a bulletproof vest, saying: “I am reassured, thanks be to God and to you. I fear nobody but God.”

Handling relations with the Scaf is likely to be a key test for Mr Mursi as he begins his term of office.

The Scaf had previously said it would hand over power to Mr Mursi by the end of the month.

Also on Friday, Mr Mursi performed prayers at Cairo’s al-Azhar mosque, one of the most prominent seats of learning in Sunni Islam.

He has sought to allay fears among some secular and Coptic Christian Egyptians that he will use his presidency to impose Islamic law.

Mr Mursi’s campaign has said he plans to appoint a woman and a Coptic Christian as his vice-presidents.