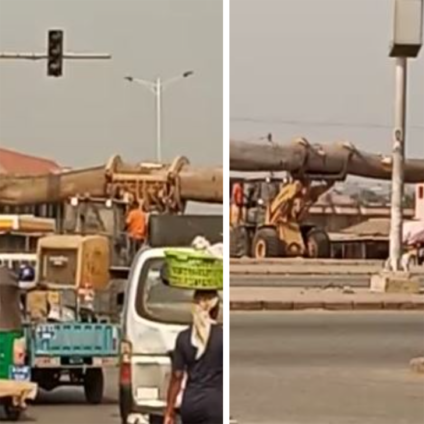 Some residents in the Ejisu Municipality of the Ashanti region are incensed at a dangerous scene of a heavy-lifting machine which was seen carrying timber in a busy traffic intersection on the Ejisu-Kumasi highway.

The log-lifting machine posed danger to commuters, including pupils on a school bus, as the driver maneuvered his way around in attempts to transport the log on Tuesday, January 25.

Traders and motorists panicked at the scene.

According to residents, a timber-carrying truck had a burst tyre which required the offloading of the logs onto another truck.

The process got bizarre as a heavy-lifting machine attempted to lift a log from one end of the road to the other.

Traders and commuters panicked as the log-carrying machine drove along the busy intersection.

A driver, Isaac Assuming, wants the government to properly regulate the transportation of timber.

“What happened could be disastrous, the government must call them to order, they cannot continue to use old-trucks to transport logs,” he said.

The Ejisu Municipal Assembly says it is working with the police to ascertain what actually happened for appropriate sanctions.