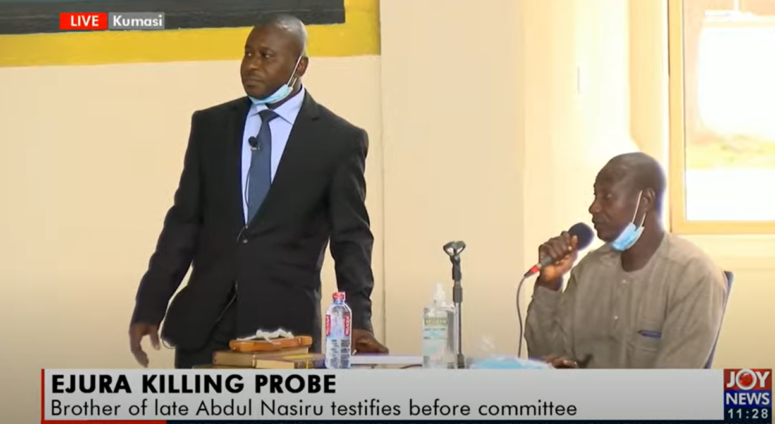 Issahaku Abubakar, brother of late Abdul Nasiru, one of the two victims of the Ejura clash, has disclosed to the Committee probing the incident, that he did not see any of the demonstrating youth, attack the Military personnel during the protest.

Testifying before the Committee Monday, he said, “I didn’t see any of the protesters throw stones or guns or any ‘missiles’ at the Military”.

He was therefore asked to watch a video on the scene of the incident, in which a protester is shown throwing a stick at the Military officals. After that, he explained that he saw, in the video, someone throw a stick, adding that it happened after he left the scene.

Abdul Nasiru, is one of the two young men who were killed during a clash between the Military and some irate youth of Ejura Sekyedumase during a protest on Tuesday, June 29.

The deceased met their untimely death while demonstrating against the murder of their colleague, Ibrahim Mohammed, also known as Kaaka, which occurred two days before the disturbance.

A three-member Committee has been set up after President Akufo-Addo gave the Interior Minister, Ambrose Dery, 10 days to institute a public inquiry into the incident and make appropriate recommendations.

The Committee is chaired by George Kingsley Koomson, Justice of the Court of Appeal. The Members are, Security Analyst, Dr Vladimir Antwi Danso, Juliet Amoah, Executive Director of Penplusbyte, a civil society organisation.

DISCLAIMER: The Views, Comments, Opinions, Contributions and Statements made by Readers and Contributors on this platform do not necessarily represent the views or policy of Multimedia Group Limited.
Tags:
Abdul Nasiru
Ejura Sekyedumase
Ejura youth protest
Ibrahim Kaaka Mohammed
killing