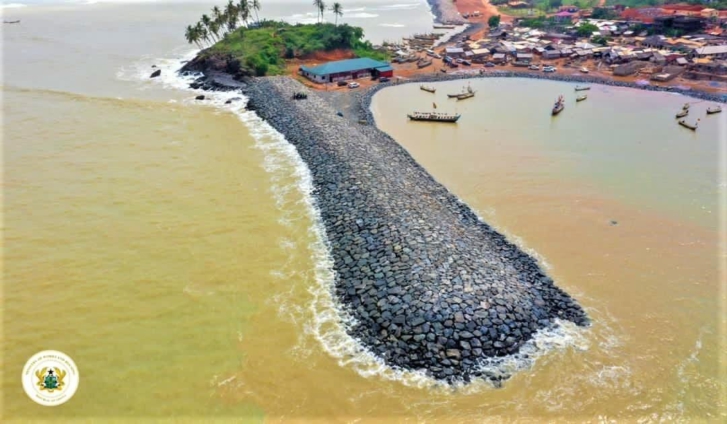 I went on a pilgrimage last Thursday to the sea defence project at Axim. This was a very personal and emotional journey, so maybe I need to declare my interest.

In a week or two, this project is scheduled to be handed over to the hydrology people and the Ministry of Works and Housing. The sod-cutting ceremony for the start of the project was on September 9, 2018, and the contract set a four-year deadline for delivery.

The project, which was to build a five-kilometre defence wall in Axim, has been completed more than a year ahead of time. That is unusual, to say the least. Ghana government projects are notoriously late and never delivered on time.

This project has been executed by a Ghanaian company, MPH and that is where my interest comes in. The MPH was owned by Atu Mould, who was my son, a son that I shared with another mother, Sati.

Some might recall that Atu Mould died suddenly on November 17 last year. If ever there was a young man whose story needed to be told, it was this son of mine, Atu; not the bits about his love of fast cars and motorbikes and anything fast, not even his legendary generosity, even though these aspects of his life make gripping narration.

It is his story of the Axim sea defence wall or the great wall of Axim as he preferred to call it, that I feel the urge to tell even though he died before the project was completed.

It is the urge to tell this story that took me to Axim last week to go and see the project in its finished state. I was shown around by Edwin the project manager and he was full of Atu and ever so proud of what they had built.

Back in 2019, I had been to the site and been taken round by Atu when construction work was at its height. I then followed progress of work from long distance; he could give you precise details about the work because he had so arranged things that he could see what was going on at the site from wherever he was in the world.

I learnt about groynes, sea defence walls, breakwaters, backfill areas, stones that looked the same but were very different.

Axim and its people were just lucky that it was their town that gave Atu the opportunity to put together his training as an engineer, his lifelong determination to be an entrepreneur and his love of beautiful things.

Atu Mould had trained as a chemical engineer at the KNUST and had since then tried his hands at various enterprises, the most interesting one for me being his kaolin factory.

But here he was now in the major league, with a contract to build a five-kilometre sea defence wall. He was determined that his work would stand out.

He would set the highest standards in the industry so that every other sea defence project would be measured by what he does at Axim.

This was to be the signature project that would qualify him to go international and bid for contracts outside Ghana.

He got into the engineering, the environmental and social aspects of the project to such an extent that it was difficult to get him to talk about anything else. As the work progressed, he got more and more involved in the community and was happiest when he watched the positive influence the project was having on the people.

A toilet was needed and he quickly had them built for the community, rubbish dumps were transformed into beautiful recreational grounds and before very long, the beach community had become the sanitation guards to ensure nobody dropped litter anywhere near the project site.

I don’t know if it is one of the things children in primary school in Ghana still learn, but in my time, you learnt about Axim very early.

Not sure at which class it was, but you were likely to be faced with: Question: which place in Ghana has the heaviest rainfall? Answer: Axim.

I do not now remember the first time I went to Axim, all I remember is how disappointed I was at how it looked, but that is another story.

For our purposes now, it is 2016 and Candidate Akufo-Addo is at Axim campaigning and he is told about the devastation being caused by the sea and how a young boy had been swept away the previous week.

He tells them if he wins the election, saving the ancient town of Axim would be high on his list of priorities.

The project is delivering on that promise. Atu wanted it done on time and to the highest standard.

When he died in November last year, two years after the start of the project, more than 90 per cent of the work had been completed.

Today, you are struck by the symmetry of the stones and the stunning beauty of the groynes.

When I was there, the community leaders are concerned about the high tides forcing the sea to eat up the road along a one-kilometre stretch of the coastline left out of the project.

As they were telling me about the urgent need to build up this space, I couldn’t keep my eyes off the garish painting that had been done on a patch of the stones. It felt like defilement and I was afraid Atu would turn in his grave.

One just hopes that there are enough people at Axim who would see the need to protect the beauty of what they have.

Axim might yet be known, not only for the rainfall but as the place for a breathtakingly beautiful sea defence wall.

There were two factual errors in last week’s column. The first female Registrar was not appointed in the University in Ghana.

My good friend Mrs Sophia Quarshie Sam was Registrar at KNUST from 2000 to 2006.

Prof. Nana Aba Appiah Amfo, the newly appointed acting Vice-Chancellor of the University of Ghana, was not a Volta Hall alumnae but a Viking, a Fellow of the Sarbah Hall.

DISCLAIMER: The Views, Comments, Opinions, Contributions and Statements made by Readers and Contributors on this platform do not necessarily represent the views or policy of Multimedia Group Limited.
Tags:
Axim
Elizabeth Ohene