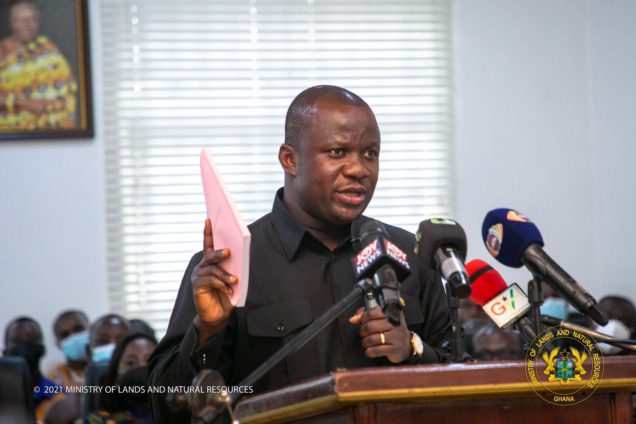 The Minister for Lands and Natural Resources, Hon. Samuel A. Jinapor has urged the members of the Ashanti Regional House of Chiefs to embrace the Lands Act, 2020 (Act, 1036), for the effective and efficient administration of land in the country.

He said the new law, which revises, harmonises and consolidates existing laws relating to land, has several innovative provisions that will promote sustainable land administration and management, and effective and efficient land tenure.

The Minister was speaking at a meeting of the Ashanti Regional House of Chiefs on Thursday December 16, 2021, where he engaged the members of the House on the Lands Act.

The engagement was at the invitation of the Ashanti Regional House of Chiefs to educate them on the provisions of the Act and to discuss matters pertaining to the lands and natural resources of the country.

The Minister used the occasion to explain in detail the law to the members of the House, particularly on the provisions relating to the management and administration of stool lands.

He reminded the Chiefs that they hold lands in trust for their subjects, and are therefore fiduciaries, accountable to their people. Under the Land Act, a breach of this fiduciary duty constitutes a criminal offence.

The Minister highlighted the requirement for all stools, skins, families, and clans that own land to establish a Customary Land Secretariat, and assured the Chiefs, that the Lands Commission and the Administrator of Stool Lands, will work with them to ensure that the Secretariats are established.

He also emphasised the provisions of the law that require all allodial title holders to survey and demarcate their lands before disposing of them.

The Chiefs raised other issues involving the management of the country’s forest reserves and mineral resources and the Minister took time to explain the Government’s policies in these areas to them.

The Minister assured the Chiefs that the Ministry will work closely with them to ensure the efficient management of the country’s lands and natural resources.

The President of the Ashanti Regional House of Chiefs, Otumfuo Osei Tutu II, who presided over the meeting, thanked the Minister for taking time to engage the House on such an important matter of great concern to the Chiefs.

He lauded the Minister for his exemplary leadership and work at the Ministry.

The Asantehene noted that since assumption of office, “Hon. Abu Jinapor has discharged his duties with diligence, humility, and integrity”, he called on him to continue on that same path.

On his part, the Minister thanked the House for taking the law seriously and for the invitation to engage with the House on it.

He reiterated the commitment of the Government to build an effective, transparent, responsive, and orderly land and stool land revenue administration which is steeped in integrity, and to work with all stakeholders to ensure the efficient utilisation of our natural resources for the benefit of the people of Ghana.