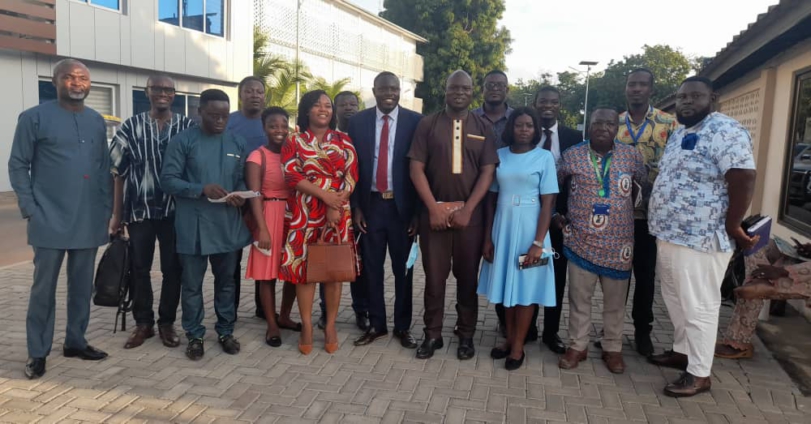 The executives of MELPWU after the meeting at the Ministry

The Ministry of Employment and Labour Relations has given approval to the Chief Labour Officer to issue Collective Bargaining Certificate to the Medical Laboratory Professional Workers’ Union (MELPWU) to represent and negotiate for their members.

The approval follows a report by the Chief Labour Officer declaring the MELPWU as a union with verifiable majority of members among the trade unions in the medical laboratory professional class of health workers in the country.

The MELPWU broke away from the Health Services Workers Union (HSWU) to form an independent trade union, but their application for a bargaining certificate was challenged by the HSWU resulting in an impasse in the health sector.

The Chief Labour Officer was directed by the Employment Ministry to redo the verification in accordance with Regulation 10 of the Labour Regulations, 2007 (LI 1833) for the avoidance of doubt and to ensure that all the parties are satisfied before the certificate is issued.

Presenting the second verification report at a final meeting held at the Employment Ministry on Tuesday 28th June, to resolve the impasse, Mr. Eugene Narh Korletey, the Chief Labour Officer said an updated data obtained from the Controller and Accountant General’s Department shows that out of 4,010 unionized workers within the medical laboratory professional class of health workers in Ghana, MELPWU has 3,554 members, representing 88.62 per cent, while HSWU has 448 members, constituting 11.17 per cent.

“We further conclude that by this result, MELPWU will be issued with the Collective Bargaining Certificate to cover the classes of workers within the Medical Laboratory Professional class of health workers in the country,” he said in the report.

In that regard, Mr Bright Wireko-Brobbey, Deputy Minister of Employment and Labour Relations, who chaired the meeting, gave approval to the Labour Department to proceed to issue the collective bargaining certificate.

“The facts clearly show that MELPWU has the largest membership, which fulfils the requirements for issuance of a collective bargaining certificate.

“In accordance with the Labour Act, 2003 (Act 651) and Labour Regulations, 2007 (LI 1833), we therefore ask the Labour Department to proceed to issue the Collective Bargaining Certificate to MELPWU,” the Deputy Minister said.

The Deputy Minister cautioned that the issuance of the certificate to MELPWU “should not open the floodgates” for union breakaways and the demand for bargaining certificates.

He encouraged the leadership of the two unions to collaborate with each other in the transition process and ensure that no worker suffers or is disadvantaged in the process.

Representatives of the Ministry of Health, led by Lawrence Lawson, Director of Training, were satisfied with the verification exercise and congratulated the parties for their cooperation.

Mr Lawson thanked the Employment Ministry for helping to resolve the matter and urged the parties to continue to work together throughout the transition process and beyond to safeguard industrial peace.

The General Secretary of MELPWU, Mr Cephas Kofi Akortor, and General Secretary of HSWU, Mr. Franklin Owusu Ansah, both thanked the Deputy Minister and officials from the Employment Ministry, Ministry of Health and the Labour Department for the leadership role in resolving the impasse.

Mr Akortor pledged the commitment of MELPWU to maintain a good relationship with the HSWU in promoting the interest of their members.

After the meeting, leaders of the two unions were led by the Deputy Minister to call on the Employment Minister, Ignatius Baffour-Awuah to inform him about the outcome of the final meeting.

The Minister admonished the unions to effectively cooperate in protecting the interests and welfare of their members.

DISCLAIMER: The Views, Comments, Opinions, Contributions and Statements made by Readers and Contributors on this platform do not necessarily represent the views or policy of Multimedia Group Limited.
Tags:
bargaining certificate
Employment Ministry
MELPWU