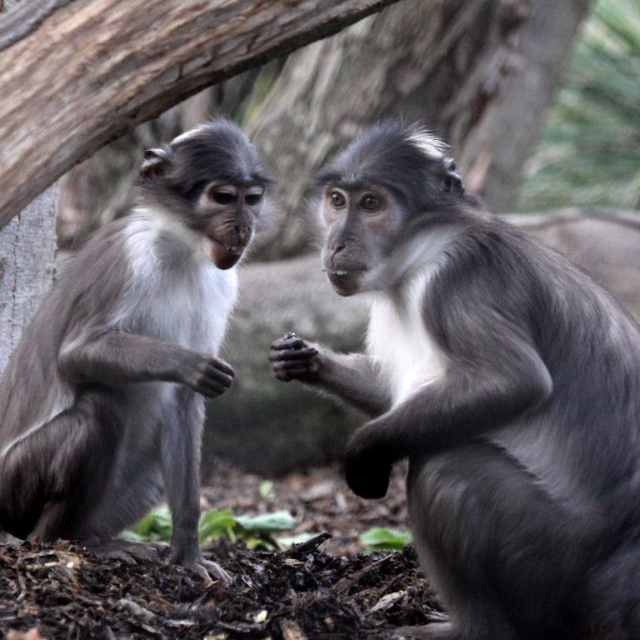 Ghana has attracted global attention as a Rocha Scientists have discovered Cercocebus lunulatus, a rare terrestrial Monkey in the Atiwa Forest Reserve in the Eastern Region.

The primate was known to live in only a handful of sites in western Ghana, eastern Cote d’Ivoire and southern Burkina Faso but now endangered.

The mangabey – a rare terrestrial monkey – is classified as Critically Endangered on the IUCN Redlist of Threatened Species.

Primates are a human closest creature with almost similar biological traits. Primates play a very crucial role in pharmacology, biomass formation, research among others hence cherished, but human activities including poaching and deforestation are wiping off the primate population worldwide.

Dr Jeremy Lindsell of A Rocha International, the lead Scientist for the new discovery lamented that “unfortunately, this newly discovered population of this endangered monkey in Atiwa is threatened by a bauxite mine being planned for this biologically important forest, as well as by snare traps and hunting for the bush-meat trade”.

Andrea Dempsey, the Executive Director for West African Primate Conservation Action (WAPCA), which supports a captive breeding programme for White-naped Mangabeys in Accra and Kumasi zoos also said, “White-naped Mangabeys are so rare that I think these may be the first photographs of them in the wild in Ghana.

"Finding them in the Atiwa Forest gives hope to our efforts to save them. Protecting critical habitat such as Atiwa Forest will be key for their long-term survival.”

The Atiwa Forest harbours a high diversity of threatened and endemic species including birds, mammals, reptiles, butterflies and amphibians.

In recent months, the high economic value of the ecosystem services that Atiwa Forest provides to many Ghanaians was highlighted in a 2016 report to the government titled 'The Economics of the Atiwa Forest Range.'

Chief amongst these services is the clean water supply flowing from the Atiwa hills on which over five million Ghanaians depend.

The hilltops of Atiwa will be completely removed during mining because the bauxite deposits are only found in the top few metres.

This will destroy all vegetation and associated fauna because bauxite cannot be extracted using a low impact method.

Re-establishment of the original flora and fauna on areas that have once been mined is virtually impossible especially with highly complex and biologically rich forests like Atiwa.

“Extracting bauxite from Atiwa Forest is incompatible with biodiversity conservation and the ecosystem services that the forest provides.

"It will spell the end of the unique and irreplaceable species that the forest contains,” Jan Kamstra of the International Union for Conservation of Nature (IUCN) said.

A Rocha, IUCN Netherlands and many other stakeholders including international businesses have advocated for Atiwa Forest reserve to be upgraded to a National Park.

The creation of a new National Park at Atiwa has substantial local support, including from the Okyenhene of the Akyem Abuakwa, who is the traditional ruler where the forest is located.

In a letter to the President of Ghana dated December 15, 2017, Dr Russ Mittermeier, Chair of the IUCN Primate Specialist Group, said “it is a matter of some urgency that the forest is properly protected both from hunting and from habitat change…

"I urge that Ghana’s commitments to the Convention on Biological Diversity and to the Sustainable Development Goals take precedence in this case and that Atiwa Forest is removed from mining plans once and for all and made into a National Park.”