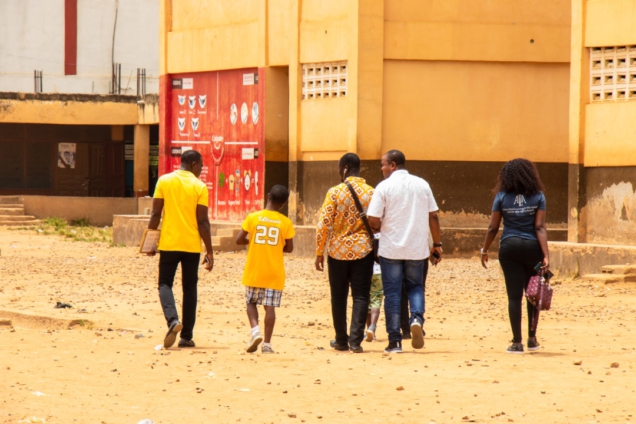 Engage Now Africa (ENA), a non-profit organisation in partnership with the Department of Social Welfare and the Ghana Police Service has rescued five trafficked children at John Teye in the Greater Accra Region.

According to Engage Now Africa, the children were trafficked all the way from Berekum in the Bono Region, with the deception of enrolling them in school.

The Director of End Modern Slavery (EMS) Afasi Komla, who made this known during a media engagement at the sideline of the rescue at John Teye, noted that after reaching their destination the trafficker failed to fulfill her promise and rather engaged them in tedious works such as selling sachet water on the streets.

“While some organisations, such as Engage Now Africa, are working to eliminate modern slavery, some individuals continue to accept it as the norm in their local communities, oblivious to its dangers,” he expressed worry.

Mr Afasi Komla who also doubles as the Director of Operations of Engage Now Africa (ENA) said upon a tip-off given to them by one of their representatives at John Teye, they collaborated with other security agencies to rescue the victims.

Also, we got a tip-off that there were additional three children with the trafficker and so far one of them has been identified.

He said after the rescue, his outfit has provided the victims with Sustainable Livelihood Support and also ensured that they were enrolled in various schools and training centers of their choice.

Mr Afasi Komla however seized the opportunity to appeal to parents to desist from entrusting their wards into the hands of strangers without knowing their intention of coming for them.

Madam Lydia Ohenewa who is responsible for the Victim and Survives Assessment Manager defined child labor as work that is mentally, physically, socially, or morally dangerous and harmful to children.

This she said, such menace has a negative impact on the children since it deprives them of the opportunity of schooling, either by obliging them to leave school prematurely or by requiring them to attempt to combine school attendance with excessively long and heavy work.

People may be considered trafficking victims regardless of whether they were born into a state of servitude or were exploited in their hometown. Adding that, most of the victims are trafficked by their family members.

Representatives from the Department of Social Welfare and the Ghana Police Service in Suhum, on the other hand, promised to look into the matter carefully in order to avoid recurrence of such incidents.