The pots for Euro 2016 finals draw are now known after Sweden and Ukraine booked the final two places.

Hosts France will be joined by holders Spain plus Germany, England, Portugal and Belgium as the six seeded nations. France will automatically be drawn into position A1, playing their games in Paris, Marseille and Lille, with the other seeds placed into position 1 of groups B through to F.

The nations in pots 2 to 4 will be randomly drawn into a position in each group to create the fixture programme for the group stage of the finals. The draw ceremony begins at 5 p.m. GMT on Saturday, Dec. 12.

Bosnia-Herzegovina's failure to qualify has proved to be Ukraine's gain. Bosnia would have taken the final place in pot 2, but that now falls to Ukraine, which means they cannot now be drawn against neighbours Russia.

Italy, Switzerland, Croatia and Austria complete the second pot. Italy will face another tough group after only being third seeds at the World Cup last year and bowing out with England at the group stage.

Hungary, who qualified after beating Norway in the playoffs, are the other beneficiaries of Bosnia's elimination, as they take the final berth in pot 3. Czech Republic, Sweden, Poland, Romania and Slovakia are the other five teams alongside them.

Republic of Ireland, the only unseeded team in the playoffs to make the finals, slot into pot four 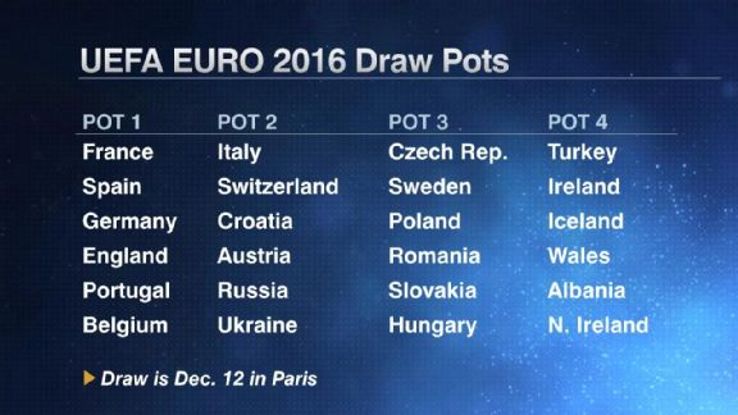 The top two teams in the six groups, along with the four best third place teams, will qualify for the knockout rounds.