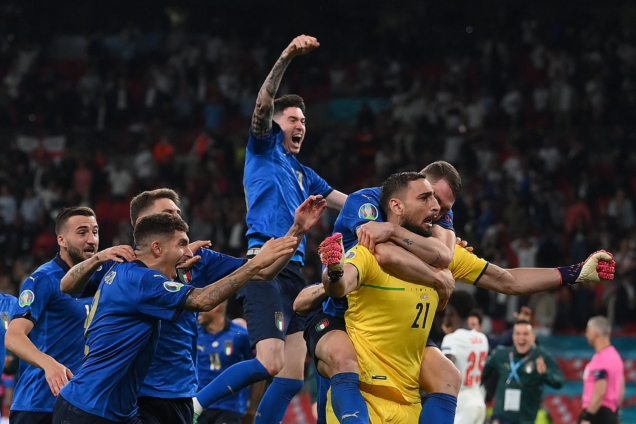 The mood is set; the grass is as green as it can get. Although Covid-19 wants to sneak its head out, vaccines have got football fanatics covered. The crowd goes gaga over that goal scored to ensure their favourite team qualifies to the next stage of the tournament. If I were to be a sports commentator, this would certainly be my introduction.

Without a doubt, I am talking about the just-ended European Football Championship, EURO 2020, covered by Multimedia Group Limited. It was not just a tournament that saw the survival of the fittest, but one that re-echoed the Hercules movie song, “Zero to hero”. This is because the Goliaths of the game were slain by the so-called less threatening force.

Fifty-one matches in total were set to find one champion. On the way to this journey, favourites like Ronaldo’s Portugal, France, Belgium and Germany were shown the exit. It was all narrowed down to two contenders; England and Italy.

England eliminated Germany after beating them 2-0 at Wembley with goals from Raheem Sterling and skipper Harry Kane – the joy for many. Unfortunately, ending Germany’s seven-game unbeaten run at Wembley. A shocker was when Kylian Mbappe missed the crucial kick as Switzerland beat France on penalties in the Euro 2020 last 16.

Twenty-two people, chasing one ball. Thinking of it, it might appear to be pretty simple, but it is not. The hearts of over 7.9 billion people across the world were on the line. Some hearts would be shattered, and others won’t stop ranting and bragging. The trophy was either to stay home or go to Rome. Prince William’s excitement and love for his country, England, glared through the stadium. Aside from the Prince, actor Tom Cruise and football legend David Beckham were also at the scene.

Under Roberto Mancini, Italy has had a good record as it never failed to impress whenever it had an encounter with the England team. England, however, had some tricks up its sleeve this time around. In less than ten minutes, there was a goal in favour of England by Luke Shaw.

Resuming the second half, Italy equalised.

It was a keen contest as the finale went into extra time and, subsequently, penalty. Well, how do I put it? The better team won, and the bragging rights had to go to Rome. So Italy has won the EURO 2020.

Fifteen of your favourite matches were telecasted live on JoyPrime and Joy 99.7 FM from June 11 to today, July 11. The month ride was filled with sorrow and joy.

To gift this experience, a well-equipped team, right from day one, held the audience’s hands and brought to them the thrills, the goals, the unfortunate offsides, and what could have been a penalty. The Joy Sports team was that caring, gentle parent. The hype was mega, and the delivery was just on point.

JoySports quartet comprising of George Addo Jnr, Gary Al-Smith, Nathaniel Attoh and Hans-Mensah shone brightly as they ran the commentary and dissected the technicalities of each game.

The G pair – George and Gary, distinct in timbre featured on your TV screens and radio. As swift as the speed of light, George did not lose focus of each player with the ball with an eagle’s eye. A high pitch tone soothing to the ear can be heard saying: ‘Mbappe with the ball, could this be the goal needed to catapult France to the next stage? Can he break through Switzerland’s defence? He shoots, and no! he missed. That was unfortunate’.

When that voice is your eyes, your heart races fast, you yearn to know if that ball makes it into the net. You are pumped with adrenaline seated at the edge of your seat, only to be heartbroken. That and more is what the G-pair brought to the table. It was great to have Gary with his husky tone onboard. He brought calmness to the troubled heart, all due to the excitement of his partner.

Centring on the EURO finale, George Addo Jnr had to make the trip to London to bring to your doorsteps the live commentary from Wembley, one of the traditional homes of football. This is the first of its kind in the country. Well, I wondered how he fared with the weather. But yes, he was psyched to make the journey all for the love of football.

It was interesting hearing George go solo for the first time on Joy FM 99.7 FM and Hitz FM 103.9 FM while Gary, here in the motherland, took charge to communicate the dreams and predictions coming through. At home, the team spent hours interacting on how the night could have ended. Gary Al-Smith and the team held the forts after the first half.

I was not wrong when I had a hunch Gary Al-Smith will have a touching write-up for his partner. The sports journalist took to Facebook to announce to the world the success chalked by George Addo Jnr. According to Gary, George although encountering immense challenges, aced it at Wembley – adding that “you (George) are a champion and if no one believes it, I do.”

“Dear George, today (actually ‘yesterday’ now because it is past midnight), you made history for yourself. It’s difficult for me to type now because I’m so keenly aware of how much has gone into you being where you are at this moment. But there is one thing I need you to understand. You have run commentary of a European final football match from Wembley, alone, for 120 minutes+ penalties. Yes, at Wembley, one of the three traditional homes of football. You’re in the history books and nobody can take it away from you,” parts of the heartwarming write-up read.

Moving on to other team players who contributed immensely during the tournament, Nathaniel Attoh, was rooted on Joy Prime to engage your favourite squad comprising of Stephen Appiah, Laryea Kingston and Michael Potter to pitch their ideas of which team had put in place the necessary efforts to make a way in the tournament.

It was indeed interesting to see the team clad in a white long shirt with that black bow-tie be the usual average Ghanaian at a point in time by assuming the coach’s role. (This player could have done this. But, unfortunately, I wouldn’t allow him to play that position. So, unfortunately, he did not bring the A-game). But in all, they brought to light what could have been, to enable some teams to qualify to the next stage.

Hans-Mensah, also on the radio, did not fail to deliver. I always wondered what the JoyNews thought when TopStory or Newsnight paved the way for the day’s match. Thank God Hans-Mensah faced their wrath and no other. With a French accent, I say ‘salut’ to Emefa Apaw and Evans Mensah.

Aside from being on your screens, Hans-Mensah, Muftawu Nabila Abdulai, and Owuraku Ampofo crafted and brought together the needed words to convey what team carried the day and which had to throw in the towel on Myjoyonline.com.

Behind the scenes was so much drama. The screams from the supporting force frightened many and wondered, God of Football, why? The debate on which team performed better every morning at the Kokomlemle-based TV and Radio station was not also missed if you are wondering.

Ernest Buamah, Bediako Asare, Haruna Mubarak, Elorm Benaiah ensured the needed steps were not missed to bring to the audience a classic experience.

I say bravo to the team. Although it is sad we draw the curtain here; I cannot wait to see what the JoySports team has in store. Safe journey back to the motherland George Addo Jnr and it appears the Pope is closer to God Almighty than the Queen.