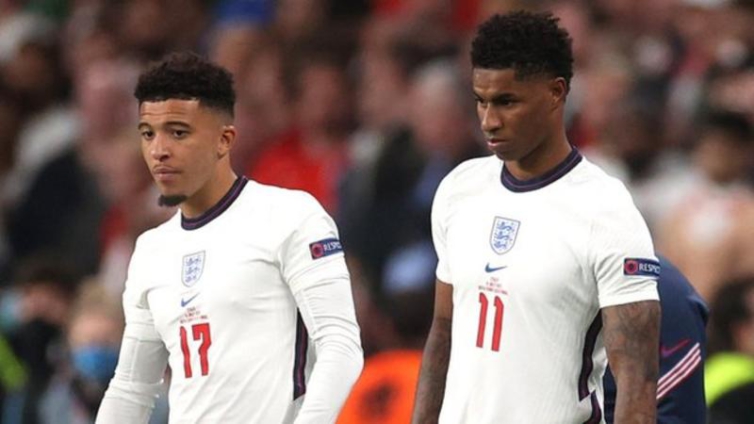 All three players missed penalties in the 3-2 shootout loss and were targeted on social media after the game.

The FA said it was “appalled” by the abuse.

England’s players have taken the knee before games at the Euros to highlight the fight against racial inequality.

“We could not be clearer that anyone behind such disgusting behaviour is not welcome in following the team,” said the FA in a statement.

“We will do all we can to support the players affected while urging the toughest punishments possible for anyone responsible.

“We will continue to do everything we can to stamp discrimination out of the game, but we implore government to act quickly and bring in the appropriate legislation so this abuse has real life consequences.

“Social media companies need to step up and take accountability and action to ban abusers from their platforms, gather evidence that can lead to prosecution and support making their platforms free from this type of abhorrent abuse.”

Rashford highlighted racial abuse he received on social media in May after losing the Europa League final with Manchester United.

And last year Sancho was among sport stars protesting against racism following the murder of George Floyd by a police officer in Minneapolis.

Social media companies have been criticised for a perceived lack of action on racist abuse on their platforms, and in April Instagram announced a tool to enable users to automatically filter out abusive messages from those they do not follow.

Following numerous instances of online abuse, a number of clubs, players, athletes and sporting bodies took part in a four-day boycott of social media in April to encourage companies to take a stronger stance against racist and sexist abuse.

DISCLAIMER: The Views, Comments, Opinions, Contributions and Statements made by Readers and Contributors on this platform do not necessarily represent the views or policy of Multimedia Group Limited.
Tags:
Bukayo Saka
Euro 2020
Euros On MGL
Jadon Sancho
Marcus Rashford