Examine your circumstance to stay or leave Ghana - GMA to healthcare workers - MyJoyOnline.com 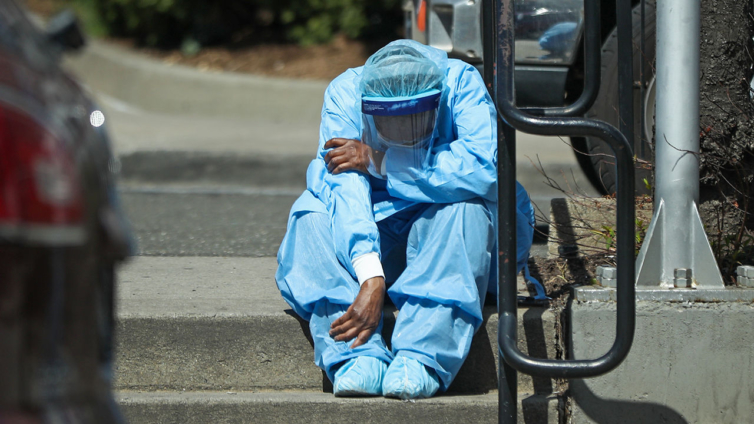 The Ashanti Regional President of the Ghana Medical Association, Dr. Paa Kwesi Baidoo has hinted that healthcare workers are leaving Ghana because they are underpaid and unappreciated.

He said the situation, if not checked, coupled with the rising cost of living may lead to looming strikes in the near future.

Dr Baidoo recalls his own experience of traveling to the United Kingdom for a brief period.

The Ghana Registered Nurses and Midwives Association (GRNMA) says over 3,000 nurses and midwives have left the country to seek greener pastures since the beginning of the year.

The Association attributes the high rate of migration of health professionals to unfair salary scales and poor conditions of service.

There are fears hospitals and health centers in the county would be hit with understaffing in the next three to five years if the trend is not reversed.

But speaking to David Akuetteh on Luv in the morning on Luv 99.5 F.M., Dr Baidoo revealed the impact of inflation on the livelihoods of health care workers provides another reason for their exodus.

“Most recently, the average rate of inflation across Ghana was 27.5%,” Dr Baidoo said, adding that “However, the rate of income increase was only 4%.”

Baidoo reinforced the possibility of strikes happening in the near future due to the tense conditions caused by rising prices in the country.

“Although nothing is certain, I do feel that there is a strike looming…It is likely that the National Health Students Association of Ghana will strike in August,” Dr Baidoo said.

He also touched on the rising cost of medical education in the country which he says is getting more costly by the day.

“It is expensive to pay university fees which are between GH₵20,000 and 35,000 per year. Many students rely on their families for financial support which often results in families having to sell assets and making significant sacrifices,” he said.

The Regional President of the GMA stated that students are unable to find jobs after graduating and completing house jobs due to a lack of teaching hospitals in the country and the government’s inaction.

“Not only are students struggling to find jobs due to a lack of financial clearances by the authorities, but they are also even having to wait six to eight months to receive salaries from their house jobs.”

Erasmus, a local doctor, who called into the show, shared his frustrations in his early days as a doctor in Ghana.

“I started work last July and was not given my first paycheck till after 10 months. Even then I was only paid for one month and was told that the rest of my owed salary would be paid to me later.”

Two unemployed nurses, Erik and Derik shared their encounter with the difficulties in the current system.

“I completed my training three years ago and am still sitting at home. There has been no communication from the administration except that I will be employed soon,” Erik said.

According to him, about 10,727 nurses have been at home and unable to find employment since 2019.

Derik added that Erik and his situation are relatable to many healthcare workers who share the same struggles and that things have become increasingly difficult for his family.

“My brother and I have been living with our parents who also have to provide for our baby brothers and sisters.”

GMA Regional President, Dr. Baidoo, believes that it is because of these reasons that many health care workers and doctors are incentivised to make the difficult decision to leave Ghana and look for work elsewhere.

“Even from my graduating class of 75 students, at least 30 have left Ghana to work overseas ..That is astonishing as it is almost half of my class.”

Dr Baidoo said up to 200 doctors are leaving Ghana every quarter.

“The total number of doctors present in Ghana is between eight and 10,000. I do not think that this number is sufficient for Ghana’s growing population which currently amasses over 31 million people.”

Rex Ford, a local travel agent, revealed that up to seven nurses consult him regarding emigration daily.

“These nurses want to leave because they feel severely underpaid and unappreciated in Ghana. They believe that they are better provided for in countries like the U.S.A., the U.K., and even China,” Rex Ford said.

GMA Regional President, Dr. Baidoo, also said, he believes that those who work hard deserve the opportunity to live a better life rather than succumbing to the same tough realities every day.

“Are we promised to live in poverty? At the end of the day, working is not about prestige but is about putting food on the table and that is what people are finding they can do upon leaving Ghana.”

“Although I will never be paid as highly as an Article 71 worker, I choose to stay in Ghana for my love of the people. However, I am not encouraging others to do the same.”

Dr Baidoo urged healthcare workers to review their circumstances and make a decision that is best for themselves and their families.

“If leaving is the best possible option, then so be it,” he concluded.