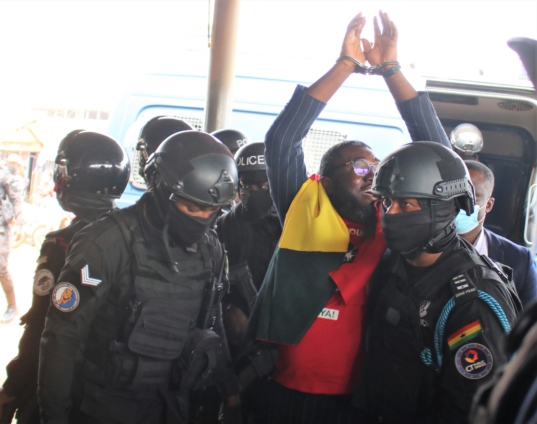 The Police have denied claims of deliberately holding #FixTheCountry Movement lead covener, Oliver Barker-Vormawor, in custody despite being granted bail by the Tema High Court.

The Court on Wednesday granted Mr Barker-Vormawor a ¢2million bail with two sureties. One of whom was to deposit documents to his landed property in execution of the bail.

But it was reported that the crime officers responsible for finalising his departure from Police detention were nowhere to be found.

One of the sureties, Felicity Nelson, said the development forms part of a grand scheme to frustrate the activist and prolong his predicament.

In a press statement signed by the Director of Public Affairs, Supt. Alexander Kwaku Obeng on the matter, the Police revealed that it was informed by the Registrar that the document presented by the sureties had been submitted to the Lands Commission for verification.

However, the Commission has not provided the High Court Registrar with a response pertaining to the document.

“Consequently, the accused person was taken back into custody to await the completion of the bail processes by the High Court Registrar,” the Police added.

In view of the processes involved, Supt. Alexander Kwaku Obeng stated that “the execution of the bail is dependent on the Court and not the Police.”

According to the Service, Mr Barker-Vormawor will be released when the court is satisfied that the bail conditions have been duly met.

Meanwhile, the Police have urged Ghanaians not privy to these legal processes “to take note and be circumspect with their comments on these matters.”

The Cambridge PhD student is also required to report to the Police once a week.

On the other hand, information reaching JoyNews reveals that the #FixTheCountry Convener has begun a hunger strike to protest what he terms as an attempt to frustrate him despite being granted bail.

DISCLAIMER: The Views, Comments, Opinions, Contributions and Statements made by Readers and Contributors on this platform do not necessarily represent the views or policy of Multimedia Group Limited.
Tags:
#FixTheCountry Movement
Oliver Barker-Vormawor
Police
Tema High Court