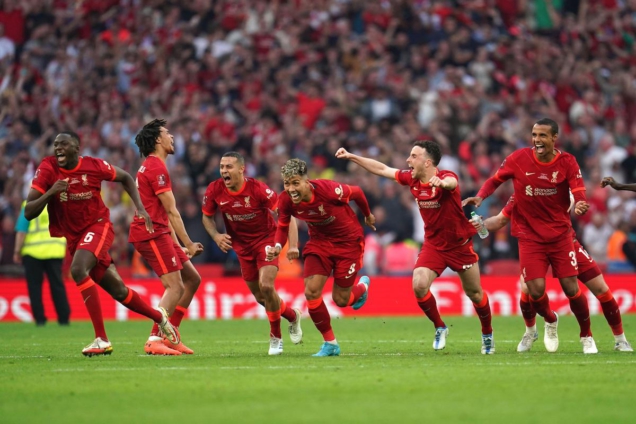 Scores of social media users and football enthusiasts, have taken to social media to celebrate Liverpool’s FA Cup victory, after beating Chelsea on penalties at the Wembley Stadium on Saturday evening.

In a series of online posts, the soccer fans applauded the efforts of Jürgen Klopp’s men, and commended them for prevailing over Chelsea, in the heavily anticipated fixture.

Amidst the tons of celebrations and congratulatory messages, some of the fans, did not fail to take the opportunity to mock Thomas Tuchel’s squad, for their inability to lift the coveted trophy.

“We will build a team no one wants to play against is crying. Lol @ChelseaFC“, a fan wrote on Twitter.

We will build a team no one wants to play against is crying. Lol @ChelseaFC

“Chelsea has more sanctions than trophies in 2022”, another comment revealed.

Chelsea has more sanctions than trophies in 2022.

The match, which was played at the 90,000 capacity stadium in London, saw thousands of supporters rooting for both clubs. Clad in red and blue regalia, the fans from both sides were very expectant of victory.

But at the end of ninety minutes, neither of the two sides had been been able to find the back of the net. Even though both teams engineered some decent scoring chances, none of them counted for a goal.

As a result, the match was forced into extra-time, with both sides, still pressing for the much needed win. However, despite all the fine moves and passes which were strung from both ends, the Blues, as well as their counterparts from Anfield failed to excite their supporters with a goal.

Typical of association football, the match was then subjected to a penalty shoot-out, to determine the winner of the tie.

In that regard, the Chelsea fans became the first to have their hearts in their mouths, after Chelsea defender, César Azpilicueta, missed the second kick for Chelsea. Having hit the post, and with Liverpool, slotting home their kicks, Thomas Tuchel’s men were staring glaringly at a defeat in Wembley.

But their fears were allayed, after Senegalese attacker, Sadio Mané, failed to seal the deal for Liverpool with the last kick in the first round of the shoot-outs. Mané failed to beat his fellow country man, Eduardo Mendy, who dived precisely to deny Liverpool the victory.

With parity restored, Chelsea’s hopes were up again. Unfortunately, their second kick in the second round of the shoot out, could not land in the goal. English forward, Mason Mount, had his kick saved by Brazilian goalkeeper, Alisson Becker.

This brought Liverpool into another winning position for the second time. Unlike Sadio Mané, Liverpool’s late substitute, Tsimikas kept his cool and kicked the ball, past the Chelsea goalie; sealing the deal for the travelers from Merseyside.

It was all gloom for Chelsea, but delight from the men in red, who had to play without two of their critical players; Virgil Van Dijk and Mohammed Sallah.

With Liverpool’s win, some supporters are now looking forward to another glory, as they come face to face with Real Madrid in the finals of the UEFA Champions League on May 28, at the Stade de France in Saint-Denis, France.

Meanwhile, Chelsea’s defeat to Liverpool, marks their second loss to Jürgen Klopp’s men, after failing to lift the Carabao Cup in February; losing on penalties to Liverpool.