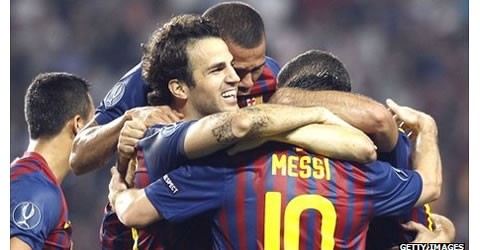 Cesc Fabregas came off the bench to score his first competitive Barcelona goal as the Catalan club beat nine-man Porto to win the Uefa Super Cup.

Barca were gifted the lead in Monaco when Fredy Guarin’s misplaced back-pass gave possession to Lionel Messi, who rounded keeper Helton and finished.

Late in the game, Porto’s Rolando was sent off for a second bookable offence.

And Fabregas volleyed in a second to seal Barca’s win before Guarin was also dismissed, via a straight red card.

It was a sad end for the Portuguese Europa League winners as they had contributed to what was an engrossing game and had fashioned a number of chances to score themselves prior to falling behind.

Hulk, who will be tasked this season with leading the line following the sale of the prolific Falcao to Atletico Madrid, twice went close in the opening 12 minutes.

However, European champions Barca had fielded a near full strength side, barring the injured Gerard Pique, who was replaced at centre-back by Javier Mascherano, and they gradually seized control of the game.

Messi’s well-taken finish, following Guarin’s glaring error set them on their way just before half time, and throughout the second they demonstrated some of the incisive possession football for which they are renowned.

Seeing out the game became much easier when Rolando saw a second yellow for tripping Messi, but to make absolutely certain the Argentine teed up the well-placed Fabregas to chest down and fire his side into an unassailable 2-0 lead.

With seconds remaining, Guarin foolishly slid in on Mascherano to earn himself a straight red and compound Porto’s woes.

By this point though, Barcelona had already sealed their second trophy in 10 days following their victory over arch-rivals Real Madrid in the Spanish Supercopa and the the 12th trophy during Pep Guardiola’s reign as coach.