Facebook to stop stalking you off-site – but only if asked

Facebook is drawing back the veil to show what data it collects on users.

A feature in settings called Off-Facebook Activity will show all the apps and websites that send information about you to Facebook, which is then used to target ads more effectively.

You will also be able to clear your history and prevent your future off-app behaviour being tapped. But one expert said the move was unlikely to have a big impact on the firm’s profits.

For now, it is rolling out very slowly, with only Ireland, South Korea and Spain getting access. But the goal is to eventually offer it globally.

The initiative comes at a time when Apple and Mozilla have already taken steps to prevent Facebook and other services from tracking users from one online platform to another via their browsers.

In addition, Germany’s competition regulator had told the firm it needed to substantially restrict the way it collected and combined data about its members unless it sought more explicit consent than it had done.

Facebook collects data from beyond its platform either because you have opted to use the social media site to log in to an app or, more likely, because a website uses something called Facebook Pixel to track your activities.

This is why when you browse a website for new shoes, you find an ad popping up in your Facebook Newsfeed half-an-hour later telling you about that nifty pair of boots you’ve just been looking at.

The Off-Facebook Activity setting will let you drill down into exactly what data various apps or sites are sharing about you – Facebook says the average smartphone user has 80 apps and uses 40 of them every month, so the list could be long.

You will then be able to disconnect the data from your Facebook profile – either the whole lot or singling out individual sources. If you take advantage of this, it should mean that those shoe ads stop following you across the internet in quite such a persistent fashion.

It is important to stress that Facebook will still collect the data, but it will be anonymised – they may know that lots of people have been looking at those boots but they won’t know that they include you.

Off-Facebook Activity has been more than a year in the making and fulfils a pledge made by Mark Zuckerberg at last year’s F8 developer conference to give users greater control over how their data is used. 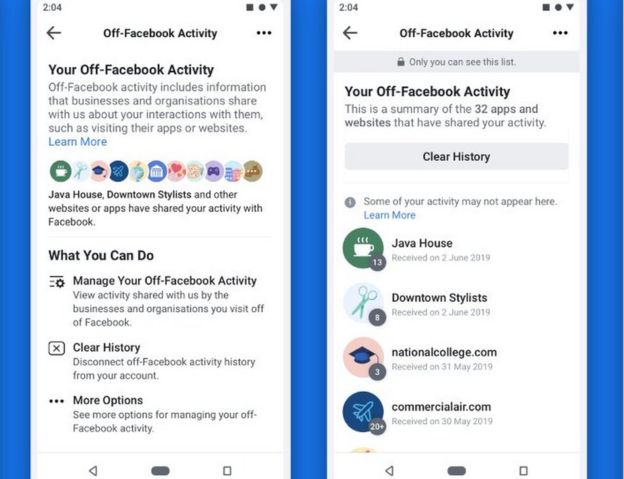 But how will users react to this feature – and what will it mean for Facebook’s advertising business? I suspect that those people who do use it will be pretty horrified. It is one thing to know that in principle you are being tracked, quite another to see it in black and white.

“This is how much of the internet works,” says Facebook rather defensively in a blog about the new tool.

And in a briefing Stephanie Max, the product manager behind it, made the unlikely claim that the reason it collected the data was to help users “discover businesses they care about.”

If millions of users do investigate this new setting and then decide to disconnect the data, then that in theory could prove damaging to advertisers and to Facebook’s bottom line. How much impact would there be, we asked Stephanie Max, if say 20% of users shut down the link between this stream of data and their Facebook profiles?

“We didn’t do any modelling of that,” she replied, going on to say that there was a lot of evidence that users valued having a personalised experience and that was intertwined with the way Facebook works currently.

It would seem bizarre that Facebook would not have worked out in advance what impact this new transparency might have on its revenues, but the company may be right to be pretty relaxed.

For one thing, it looks likely that finding and then acting on the Off-Facebook tool will be a very niche activity. For another, an expert on Facebook’s advertising business says it is changing in ways that make the precise targeting of users less important.

Mat Morrison, planning director at marketing agency Digital Whiskey, says advertisers are gradually waking up to the idea that targeting 23 year old men in High Wycombe who like mountain-biking and sushi is not that useful.

“Agencies are trying to tell clients to calm down about nano-targeting,” he explained.

“When we began using Facebook data we could easily create nano-target audiences – only 20 people. Of course, this turns out to be a waste of everyone’s time and money.”

The story a few years ago was that the hugely expensive ad break in ITV’s Coronation Street, which delivered a broad if poorly-defined audience, was being superseded by the precise targeting offered by social media ads.

Now, says Morrison, the pendulum is swinging again and Facebook advertising is being valued for delivering a wide swathe of the population. “Creating a broad consensus in the audience is what advertising has always been about,” he says.

So even if some of the Facebook population revolts against the constant tracking of their wider online activities – and remember the social media site will still have lots of data about them – it is unlikely that advertisers will desert what has become the prime destination for their messages.

It is worth noting that two of the countries where the new setting is making its debut are in the European Union. The tech giant can show EU regulators that it is giving users more control over their data, without doing any damage to its ad revenues. Job done…