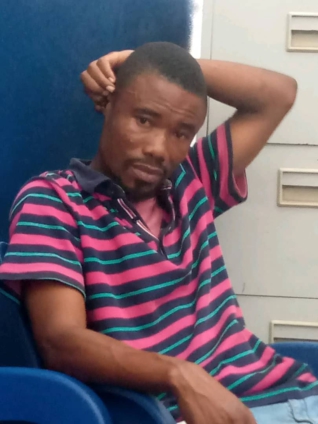 A fake journalist who claims to work for Onua Fm has been arrested by some residents of Gomoa Buduburam and handed over to Buduburam Police station for extortion.

Frank Basowa has been accused of allegedly extorting ₵100 from some shop owners who he claimed to have defied the lockdown directive, although Buduburam in the Goma East District is not part of the areas under lockdown.

According to the Unit Committee Members at Gomoa Buduburam, Frank and his accomplice have been visiting shop owners and taking the amount and closed shops of people who failed to pay.

Further investigations by the Committee revealed Frank was neither sent by the military officers nor was he a staff of Onua FM but was using a fake ID card to defraud traders of the area.

In an interview with Adom News, one victim recounted how Frank closed down his drinking spot because he could not afford the required ₵100.

He added that several others had their shops closed for the same reason.

This prompted an investigation after which they discovered he was a fake journalist.