Family of 7 killed by fire at Gomoa Budumburam 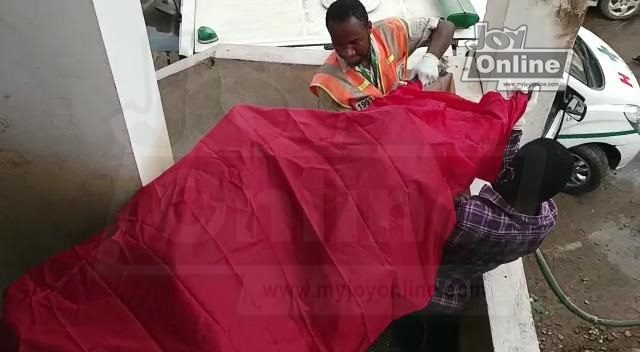 A family of seven has been killed in a fire that engulfed their apartment at Big Apple, a suburb of Gomoa Buduburam in the Gomoa East District of the Central Region.

Robert Assan Donkoh, 60, and his four-month-old baby girl and the entire family were burnt beyond recognition.

Eyewitnesses say the fire started around 5:30 am but are unclear what might have started the fire.

According to the residents, they woke up to screams and shouts of the family for help.

When they rushed to the scene, they saw thick billows of smoke from the apartment of the deceased.

“When we rushed there, we saw the wife of the headteacher and one child of theirs shouting for help, we did all we could but the intensity of the fire was greater. Alas! We lost all of them,” an eyewitness narrated.

Another resident said, “the nature of the charred bodies can’t make anyone recognise them even though we know them. It’s a sad day for us in this community. It’s too difficult to believe.”

When the Ghana National Fire Service personnel were alerted, they rushed to the scene and started fighting the fire, but by the time they got access to the rooms, all seven members of the family were completely burnt.

“At 6:40 am, our men arrived at the scene and looking at the structure: burglar-proof before the main entrance, the hall and one before the bedroom, it was difficult to access the family and to save them.

“When we arrived, the fire was burning seriously. However, our men were able to bring the blaze down within a few minutes. It was then we realised that a family of seven have been all burnt,” Operations Officer of the Ghana National Fire Service at Gomoa Budumburam, ADO 2 Patrick Bawa narrated.

He said his personnel quickly mobilised the police, the ambulance to assist. But, he added, the scene is under investigation.

“We have cordoned off the place because the place is now a crime scene. However, we will still come back for further investigations,” he stated.

According to ADO 2 Patrick Bawa, If the building were to have a fire alarm system, the alarm would have sounded for the man to hear but unfortunately, there was no fire alarm systems that could have warned the inhabitants.

He advised the public: The whole structure has no fire extinguisher and has no detector. So we are advising the public to get all these things in their homes to be able to detect early fire warnings.”

DISCLAIMER: The Views, Comments, Opinions, Contributions and Statements made by Readers and Contributors on this platform do not necessarily represent the views or policy of Multimedia Group Limited.
Tags:
Family
Fire
Ghana National Fire Service (GNFS)
Gomoa Budumburam