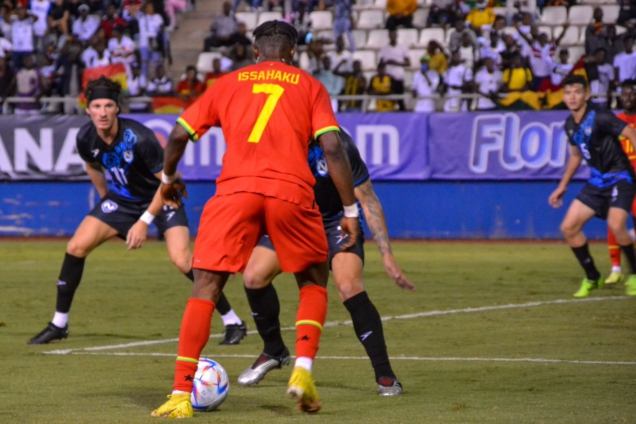 Head coach of the Black Stars, Otto Addo, says Abdul Fatawu Issahaku needs to be more patient and precise with his shooting.

Addo made these comments following Ghana’s narrow win over Nicaragua on Tuesday night in the team’s final friendly of the September international break in Spain.

The Sporting Lisbon winger scored the only goal with a brilliant curler from the many chances the Black Stars created in the game.

The 18-year-old went straight to Ghana’s bench to celebrate his debut goal for the Black Stars with his coach.

When asked about his pre-game conversation with Fatawu, Addo was full of praise for the youngster, whose inclusion in the squad for the September friendlies raised eyebrows.

“He’s a very good winger. He has a powerful shot. Sometimes he needs more patience with the shot and to be more precise instead of hammering it all out.

“This is what I told him; he should feel free, make runs behind the lines, go one-against-one, and when there is a chance, he should use his left foot very gently.

“If he uses it gently, it’s even enough just to be precise and score the goal.”

Since making his Ghana debut in September 2021, the U-20 AFCON winner has made nine appearances for the Black Stars, scoring his first goal on Tuesday against Nicaragua.

DISCLAIMER: The Views, Comments, Opinions, Contributions and Statements made by Readers and Contributors on this platform do not necessarily represent the views or policy of Multimedia Group Limited.
Tags:
Fatawu Issahaku
otto addo