Father arrested after his 9-year-old son drives to school 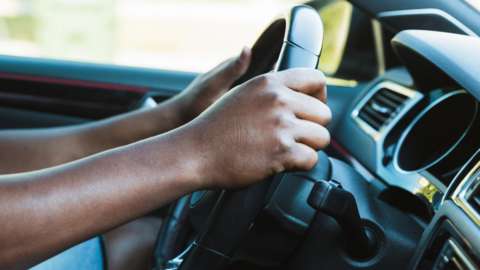 Kenyan law prohibits those under 18 from driving

A nine-year-old in school uniform was stopped by police in Kenya’s capital, Nairobi, while driving to school with his father in the front passenger seat.

The saloon car was stopped before it entered a private school in Athi River, on the fringes of the city, after police gave chase when the boy accelerated after being flagged down.

His younger sister was found seated at the back also in school uniform.

Kenyan law prohibits those under 18 years of age from driving.

The boy was reportedly speeding on the Nairobi-Mombasa highway, one of the busiest in the country.

The father was arrested following the incident on Wednesday, but the two children were later taken to school in a police vehicle, the Daily Nation newspaper reports.

“This action, which is not only irresponsible but also contravenes traffic laws, exposed the minor and other road users to grave danger,” police tweeted, saying the father would be taken to court.

“The suspect further acted against the Children Act that vests statutory parental responsibility on the protection of children from harm and danger.”

DISCLAIMER: The Views, Comments, Opinions, Contributions and Statements made by Readers and Contributors on this platform do not necessarily represent the views or policy of Multimedia Group Limited.
Tags:
9-year-old son
Kenya
Nairobi