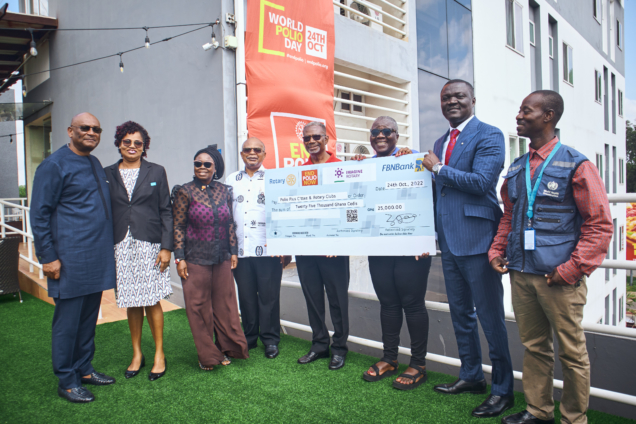 FBNBank Ghana has joined the world to mark this year’s World Polio Day on Monday, 24 October 2022.

This year’s celebration of World Polio Day was celebrated in Accra at the Airport View Hotel with the theme ‘A Healthier Future for Mothers and Children’.

FBNBank over the years has played an active role in advocating for an end to Polio with the support of the National Polio Plus Committee and Rotary in Ghana.

In line with this, the Bank has supported activities aimed at eradicating the disease.

Speaking on the Bank’s contribution to the campaign against Polio, Victor Yaw Asante Managing Director of FBNBank who doubles as the Governor of Rotary District 9102 which comprises Ghana, Niger, Benin and Togo said “Polio is an infectious disease, contracted by children which can lead to paralysis in the body.

“We are very optimistic that together with our partners we can go ahead and eradicate this canker that has been with us for decades. Eradication is possible through mass immunization and vaccination.

“As a bank, we are committed to this fight because we have over the years remained focused on putting our stakeholders first which includes the entire Ghanaian populace. Our position is strengthened by the partners we have on our side.

“On the FBNBank side, our commitment has been possible because of the passion of our people. We at FBNBank, therefore, believe that we can continue to make gains.

“We however believe we would achieve a greater impact if more corporate entities join the fight and support the activities of the National Polio Committee and the Rotary Clubs in Ghana. Working together, we will win.”

World Polio Day has been observed on the 24th day of October of every year since 1988 to raise awareness of polio and to take measures towards eradicating this disease.

The celebration also provides an opportunity to highlight global efforts toward a polio-free world and honour the tireless contributions of those on the frontlines in the fight to eradicate polio from every part of the world.

In a speech delivered on behalf of the World Health Organisation Representative in Ghana, Dr Francis Kasolo by Dr Michael Rockson Adjei, Immunisation Officer at the (WHO) said, “World Polio Day highlights the global efforts to end polio worldwide.

“As an organisation, we can draw inspiration from the WHO European Region which achieved a polio-free status 20 years ago to ramp up their efforts to achieve the same for our country and the Africa Region.

“The unveiling of the “End Polio Now” flag, should serve as a reminder to strengthen the commitment to maintain equitable high immunisation coverage, and high-quality surveillance to detect any presence of the virus and prepare to respond in the event of an outbreak and also use our sister agencies to continue the collaboration with all partners of the Global Polio Eradication Initiative in supporting the Government of Ghana to end Polio.”

FBNBank has in its 26 years of operating in Ghana remained focused on putting its customers and communities first.

This, it has sought to do through the rich value and excellence of what the Bank contributes to the relationship with its stakeholders as a whole, particularly the customers.

FBNBank Ghana is a member of the First Bank of Nigeria Limited Group which is renowned for its great customer service and general stakeholder engagement garnered over its 128 years of operation.

FBNBank Ghana has 25 branches and two agencies across the country with over 500 staff. FBNBank offers universal banking services to individuals and businesses in Ghana.

DISCLAIMER: The Views, Comments, Opinions, Contributions and Statements made by Readers and Contributors on this platform do not necessarily represent the views or policy of Multimedia Group Limited.
Tags:
FBNBank Ghana
World Polio Day